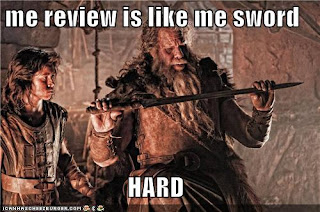 As hardcore fan of all things Conan I have went to see new movie on the opening night. Went in the movie theater with a cautious optimism and went out with mixed feelings. Wait, wait, just to be sure before we get any further THE MOVIE DID NOT SUCK. There, now you can read further without worrying that I will shit all over the CTB and ruining it for you.
The world


The feel of Hyboria was captured perfectly. There are many references to actual places like Hyrkania and the architecture (particularly that of Acheron) is amazing. The visuals when it comes to weapons and armors are also nailed down to what should be expected. Apart from Cimmerians raiding horses (good luck with breeding horses in the mountains ;p) there were no major mess ups. The cimmerians could be a tad more hardcore, but overall the movie did justice to them. Everything was very dirty, gritty and rugged which I liked: if a character was cut (like Tamara) the scar will stay in the next shot, and if the characters are fighting on the dirt they will get dirty. That is just how things should be.
The gore


I was very afraid that the movie producers will go with that PG-13 crap and turn savage world of Conan into chick-flick. Not so. This is the most bloody and brutal movie I have seen without the director taking it to the absurd level of "The Saw" or "Tarantino" movies. Just right amount of savagery and blood splatter.
The script

By Crom, here we go. Time to take the first dump on the CTB. It is like the writers could not make the decision: should we go full nerd-core on this or go back to 1980 style where the only thing the movie has in common with the books is Conan. The end result is this half-baked story where it is "kinda Conan" story, but with references to actual stuff from the books (Artus, for example, talks how Conan killed Yara and stole the elephant hart gem). It very much feels like the writers wanted to throw a bone to hardcore fans, but at the same time make Conan easier to digest for casual movie watchers. This is unacceptable. The story of itself is cheesy Acheron magic power-flick (give the fucking Acheron a rest already, its has been gone for 3000 years at the time of Conan :X) and once again Conan is driven by the vengeance. I loved the books because Conan was just roaming the lands of Hyboria searching for riches and good fights, not because he had father-issues to deal with. Bah! It was a weak script, WEAK I tell you! And the scene when the Conan was born on the battlefield... it was so much rushed that it felt more like an abortion and not a birth. If you want to do a scene that portraits an event that supposedly defines the character don't rush things. Let's get over with this...
Fighting and magic

Both done very well. The sword fights are very artful and brutal and the magic that is shown in the movie fits what is portrayed in the books: mix of demonology, necromancery and mesmerism. Really, not much to say here other that well done.


No one annoyed me with their acting which is good. Did I say no one? Well apart from Zym's daughter when see was a kid. For some reasons the writers went with this goth-emo-chick and she very much felt out of place both with her acting and wardrobe. Geez, why not put some tattoos on her too along with a stripe of green and pink hair? I really liked Artus, he was a cool guy. Ela-Shan was obviously a character lifted straight from Conan the Destroyer for he resembles Malak in every way.
Conan


Ah crap, this will be hard. The acting on Conan was decent apart from Momoa trying to get that deep, low voice that Batman fails so miserably at. Its cheesy acting and it doesn't make the character feel tough at all. Geez, go see a throat doctor or something. Second thing and kinda important: Momoa was not in shape for this movie. There, I have said it. Being actively involved with bodybuilding for several years myself I know how hard it is to pack on meat on your bones. This is why I really appreciate actors like Stephen Lang who really busted his guts to look respectable for the role of Colonel Miles Quaritch (and Zym in CTB, can you believe that?). Just doing some weight lifting and eating some chicken with peanut butter (supposedly Momoa's pre movie diet) ain't gonna cut it when you are preparing to play the role of Conan, a character very much defined by his body and sword arm. I am not saying that Conan must be looking like 7 times Mr Olympia Arnold Schwarzenegger, but the looks of Momoa is pulling in Conan could do for shows like Xeena or other bull crap.I am calling for a happy medium. If you can't get a good bulk going then at least go for shredded, ripped appearance. Momoa has neither the mass nor the conditioning in the CTB.  Why is this important? Well Conan is getting is ass kicked by almost everyone in the movie. Every major thug out weights him and throws around like a rag doll. In the books Conan had his speed and agility (to which Momoa did justice), but lets not forget that he had broken the neck of Cimmerian bull before he was 15teen. Also Conan strangled Baal-pteor (a man of amazing strength) and pretty much tanked Thak, a bone-crushing gorilla. In the the books at worst Conan strength is matched, but usually he just bitch slaps his opponents into submission. The movie lacked the feel of that raw strength which was replaced with "agile swordsman". If you are going to be playing Conan then please try harder, almost every actor in "300" would have done a better job with their conditioning for the movie. So Momoa could have done a lot better but he didn't and I don't think it was intentional.
The music

It was just there, in the background. Sadly no memorable tune. In that regards 1980 Conan is till a masterpiece.


I don't think I would want to see this movie again any time soon, but over all it did not disappoint. It has it's strength and weaknesses, but the core (the world and the fights) is there. I wouldn't cry is Momoa was not hired for the second movie, but if he pulls his act together he can stay because for most part he did a good enough job. Hell, compared to Arndol he did a great job. I would say go see this movie, if anything it will make your appreciate Funcom writers even more. Those guys are worshiping Robert E.Howard and turning out gold when it comes to lore. Hey Lions Gate Movies, go hire some good folks at Funcom to get you the next script and have your current writers serve them coffee or something.
Posted by Slith at 6:50 AM

I dont agree with you. I found the movie great and momoa was great for conan (I dont think that conan was ever discribed by Howard as a Mr Olympian bodybilder :D)Conan was bruttal and with no manners (espacialy against women) as a barbarian should be I would like to see him in a new film too. Ofc as you say basil poledouris music was (and stil is) something special in the old movies.
I saw it in 3d and must say that sceenery was magical in the movie. Clothing wajavascript:void(0)s great and hyboria was greatly captured.