The savage rip off (coast not included) 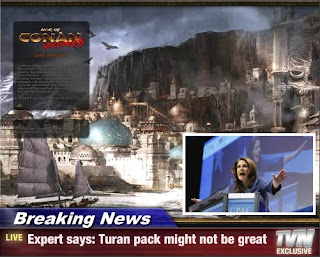 Brace yourselves for you are entering the muddy realms of my mad rants and complains. Not safe for forums.I have blown 2000 funcom points for early Turan access. It felt very wrong to pay for this content while being premium subscriber (since may 2008 I might add). I am really on the fence when it comes to paying larger sums for something that cannot be considered a full blown expansion (like ROGS). On one side I would like the map of Hyboria in Age of Conan to be filled with different places to visit (and the promise of such is tied to the biyearly adventure packs) but at the same time: what the hell am I paying the subscription fee for? This very much feels like a business model inside another model. Want free gaming? Pay for content access or enjoy what is given for free. What the whole package? Then welcome to the luxurious group of premium subscribers where for the monthly fee you will get royal treatment. Premium covers everything except expansions and...content we feel like slapping "adventure pack" sticker on it. This is exactly how I am feeling about Turanian expansion: content put together under "adventure pack" label just to squuize more nickles and dimes out of subscribers. Not cool Funcom, not cool. What I don't like is paying for crap that I am not going to use and/or enjoy. This very much applies to the adventure pack which consists almost exclusively of content that I will not touch or the very short-lived content.

3,5 raid - a weird concept of itself (considering the unfinished T4 raid in Khitai), but I have no say as non-raider. Not going to do it.

Ardashir Fort - group pve is not really my cup of tea. I have done several HMs runs in ROGS but that was only for those precious Rare Tokens and those I really easy to get now . For me not really needed.

Ardashir - 50-55 lvl zone, although it looks good, seems like a waste in post ROGS reality. I long for a one like ones in Khitai, Paikang for example. Zone with hard to beat mobs and a story with repeatable stuff to do. Ardashir looks great and I think it would provide such content if it wasn't for the fact that it is aimed towards low level characters. What a waste. There is even a faction in Ardashir and it's vendor (if it was 80 lvl zone) would make a great addition and I chance to spend rare tokens on some new stuff.

Dead Man's Hand - great concept, but very short lived. You can pretty much power through this content in 2 hours and that is with reading every bit of quest text line. I see no reason to ever come back to this zone/instance. The drops/quests are the major issue: there are none.Each time I have downed a boss or a mob those dropped some green trash worth mere coppers. Seriously, I would be more grateful to find a TURD in my loot box. This turd could be a white generic item and having it in my inventory would definitely bring me more joy than hoarding my greens to the nearest NPC and making 1 silver off that. The drops in aoc are worthy of another post, but the Dead Man's  fail is a prime example how good content can be short-lived because people have absolutely no reason to come back (remember those two new solo instances in Gates to Khitai zone? Me neither).

The Island of Iron Statues - Hands down the best addition to the Age of Conan I have ever seen. Ever. I consider that a high praise, but in deed it is well deserved. Stunning visuals. Deep, rich lore with such nuances like the mysterious presence of one called "Aratus" (for me finding him felt epic!). Clever bosses mechanics that are not pure tank & spank (like both bosses in Refuge). Hard Mode version of the instance with extra rewards as well as social drops. Challenging experience even for veterans, no free rides! Truly, a benchmark instance for the future.

So as you can see out of the whole adventure pack I will, in fact, be using only Iron Statues and could easy pass on the whole Dead Man's Hand place. Really. The problem is that Refuge, which is also a very good solo experience, came free for subscribers. So pretty much I am "forced" to pay for the whole add on when I only want what I used to get for free (solo instance). It got me thinking: why not then PAY for each part of the adventure pack? You know, couple points for raid, some for group instance and....oh wait, isn't this EXACLY what free-to-play model is offering to players? Indeed it is. This is a very sticky situation. What if you are freshly dinged lvl80 and as such not fit for either raiding nor iron statues? Well then, it is 2h of Dead Man's Hand for you my friend.

It seems like Funcom wants to continue with this "something for everyone" philosophy of content development. My beef is this: I am ALREADY paying for the content "for everyone" because I am a subscriber. Subscriber's money is what keeps MMOs going (although that, apparently, is changing) for the free-to-play crowd. So you are charging me again why? My only hope is that next add on will progress the game as a whole, introducing system changes/additions like whole new crafting (I would gladly pay extra for that). Simply dropping some content (that we used get for free like Refugee solo instance) ain't going to cut it and I can only hope Funcom will not get encouraged by "lazy-money" made through Turan add on.
Posted by Slith at 2:07 PM

oh don't be that bitchy :D its 20 zlotys, its nothing for anyone with job. And i can assure you that the boss t3.5is just SUPER great. Sharp your ears, couz we are near downing him, which makes polish server to be heard again ;) same for fort, instance is just great. I pity you in some way slith. its a real waste of great game, not draining all whats inside. not using full package :) Cheers

Oh, I care little about that pocket money I have sent, but I am a crafty consumer. Lazy-money for lazy-product creates more lazy-stuff.

Make Funcom work for their money and turn out gold, not poo.

pve bullshite. .all I can say..

good review! thanks for the information... Im for sure not going to get it.