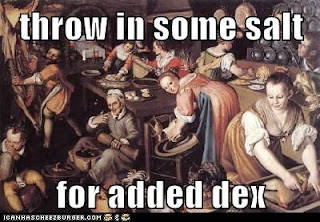 First batch of promised trade skill revamp is finally on the TL. Strangely enough now there is a split between classic "crafting" and "gathering skills". The core crafting changes are far from ready to go TL, but we can already play around with some of the gathering skills. Right now on live servers you can pretty much pick up every gathering profession from skinner to miner. The revamp will add depth to those, but at the same time it will limit your choices to just 2. If you check out the latest patch notes you can take first two of the many to come: fishing and skinning.

There is not much to skinning right now. If you have "skinner's knife" in your inventory then after you have slain an animal that is "skinnable" an icon will pop up and you will have an option to gut it. As of now every animal drops "generic leather" since the new ingredients and materials are not yet implemented.

This I like. I have no idea how will this profession generate materials for other professions (you can bet it will for alchemy and cooking), but it is obviously more of a money maker: stack of 10 trouts (took me about 10-15 minutes to fish) sold to NPC for 50s. The real fun begins when a combo bar pops up which means you have cough a special fish. You need to quickly and without any mistake go trough combo motions and if you succeed you will fish out either more valuable fish or a loot box. I got this on my second attempt and the loot box had pretty neat blue ring in it. The best part is your chances to catch fish/get boxes rises the more difficult is the area you are trying to fish. In Paikang fishing was much better, but I have failed a lot of times because the fishes were exceeding my level of skill.

Skinning is definitely far from being done, but fishing is fun and engaging minigame of itself. Sitting in the Old Tarantia port and trying to catch "the deadliest catch"? With this system I can imagine myself doing it. Also check out the video by Kehml from AOC Test Live Servers featuring fishing combos.

EDIT: yes, so this was APRIL FOOLS joke. There is no fishing in AOC, nor there will ever be (most likely). I made this screenshot about 1 year ago and just had to use it this way. The rod is just sticked into the ramp and my charactered is doing /danglefeet emote. Oh well, enjoy!! :D
Posted by Slith at 4:59 AM

Excellent first view of the Crafting system. I figured it would be minimal in polish. But I see a ton of possibilities out there. For you as a pvper, fishing warz!!!! lol. Anyways, I like so far where they are going with some of the gathering stuff.If it gets a solid release it will be something I look forward to.

another one bites the dust :D:D

DOH! You got me! I wasn't even paying attention to the damned title accept crafting rolfz! Anyways Imma go home now that my 24 hour shift is almost over and get drunk!

..I wish it wasn´t just a joke, I really would love this implementation of fishing.


Thanks for the laugh!

I was afraid someone would say something like that :X