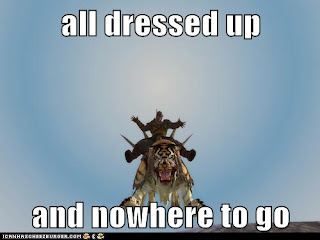 All Right, time for some good old QQ. You haven't seen THAT on the hideout for a while, now have you? You have been warned! Nerd rage inside.

Recently I am very bitter about my Age of Conan. It very much feels like I just don't have anything to do inside my MMO of choice. This is 2009 all over again and it makes me bitter. You see I am a progression whore. I love to progress my character, to expand it, to grow it. If I don't get to do that I quickly lose interest and get annoyed. If  I can get anything out of my gaming time, even a shitty piece of vanity armor, it gives me a great satisfaction. I can play less and be satisfied with my gaming when I am making any kind of progress. Example? I wanted to get "darkslayer hood" drop from Amphitheater of Karutonia purely for my vanity. Had a blast doing low level quest chain in Ymir's Pass and then solo farming the Boss 5-6 times until the desired loot dropped. See? I am a reasonable man and I don't expect purple candy showers from every mob. Whatever content will do just fine.

The problem is that I am out of content to do. Completely.

PvP - hitting pvp lvl 10 made me very bitter about minigames. I have lost my focus. With random people in my team (that don't even speak English mind you) what difference does it make whether I win or lose? I won? Gee, I get token that I don't have anything to spend on and prowess gain that I can spend on perks I don't need or want. And it is not like I farmed my ass in Bori: pvp lvl 5 to 10 content lasted me TWO YEARS. I think is is reasonable for me to expect new stuff to do in pvp after 2 years. And lets say I lose a minigame? I don't need pvp xp anyway, can't read group's chat rage  coz it's in russian and minigame wins/loses are bugged so those aren't even tracked anymore.I am pvp lvl 10, the deed is done, but I learned the hard way that current pvp without friends is a pvp for the sake of pvping. Just not fun, lonely and pointless struggle.

AA System - I like AA system. It lasted me for a very long long time. But, alas, I am done. I don't have IT ALL, but I got all I wanted or needed. Whatever addition to my perk collection won't add any more passive power to my character nor I will ever use said perk. Maxing out all the perks for the sake of maxing them out seems like less that desirable goal.

Khitai Factions - another aspect of AOC that I have enjoyed thoroughly. During my "crazy years" in Khitai I have leveled up every faction to rank 4. Every single one. Brittle Blade and Shadows of Jade twice even. It is done.

Dungeons - I got my full epic Brittle Blade armor from Khitai. Also got me that sweet cloak from House of Crom. Beyond that there isn't just anything I might want from 6-men dungeons. Fort in Ardashir and House of Crom are also very poorly itemized with crappy blue stuff Sure, those are great for vanity, but apart from that you are BOUND to be wearing something better already. Otherwise if  you wouldn't have killed the Boss to get them dropped in the first place. There is just no incentive to re-do those "new" dungeons and Khitai stuff after 2 years is farmed to the death.

Rare tokens - Funcom already gave us Apostate and Iron States from which you can get rare tokes for solo play. In the upcoming patch also "Lost city" and "Dead man's hand" will  yield same rare tokens rewards. More ways to get tokens is good, right? But what good are those if there isn't anything to spend them on? Again, after 2 years I got every single item from faction vendors and I got my tokens very very slowly from solo play. Took me like a year since Apostate launched.

Raiding - I am not a raider. I can't commit 3 hours straight to raid on a weekly basis. Sure, I will sign up for the raid from time to time, but this isn't my cup of tea. I am in a guild that raids T4 so I can't feel very privileged. Hell, I am "elite" of AOC's population because for what I know people are still stuck in T1 & T2. Whatever. This content is just out of my reach for scheduled reasons alone.


ALTs - I am 1-character player. You should know that by know :D. The very idea of re-rolling some new class seem nightmarish for the AA leveling alone. But main thing is that I like to play one character. My brain is just wired this way.


There you are. If there is something else to do in Age of Conan than I would like to hear about in the comments because I am out of options. And my play style is something I would have described as "dedicated regular". I don't achieve things in the game because I am hardcore and I burn through content, but rather because I play regularly and am dedicated to the one game and one character. I reap the benefits over time. So if I got out of content with my "turtle's crawl" slow play style no wonder so many people quit Age of Conan out of sheer boredom. MMOs shouldn't be boring, those should be addictive.


Bah, what happened to you Age of Conan, you used to be cool....

Hey, a little bit off topic, but how did u kill the devourer in amphitheatre solo? I tried (for the hood as well) but the add spawn would always interrupt me hitting the chain.

I had the very same feeling with AoC years ago, then I started to RP to, entertain me, then funcom broke and patched RP out of the game.

They also broke PvP since you can now only play alone and not with friends or for some competition...

AoC basicly has no real endgame content in my eyes... It would help if FC would bring in somekind of tournament system which also shows who wins it and so on... then you would have at least the goal to win the tournament... add to that territory control, so you try to get that area for your side/faction/whatsoever and you again have a purpose... to fight and win a war...
But AoC is lacking of everything and the current direction is based on PvE, while after some time you have done everything and you need new PvE-Content... but for whar do you need all this new shiny gear anyway? To beat the next instance which gives you new shiny gear?

All in all, AoC has no longtime goal and due to that it wont be able to hold much longtime players.

As for soloing devourer:

when the boss is around 30% bring him to the chain and jump on the chain. Now kill him. You will be able to hit chain, but much less mobs will be able to hit you (around 4). As they are hitting you use cat's paw at the very last second and everything should be ok. Took me several tries but it works.

what about kheshatta duels or premade minigames? why you dont play them? imba content!;)

i guess, when you have done everything in a game without an end its not so much fun anymore. I hope you don't stop play aoc though, cuz Your blog must be best ARound!

Give ranking pvp system with rewards for guilds, social armors for pvp premade mini, arena system, greatly improved rewards in open pvp (nowadays its easier to get bori tokens from minis than from killing ppl in open pvp), mini game premade tournaments with funcom points as a reward etc, etc. Give full aa tree working for everyone in pvp to make game more new player and alt friendly in pvp aspect. PVP is broken and thats the only non repetable content but atm its only about farming lowbies because of such a great imbalance

I had finished everything on my demo 2 years ago then I rolled sin and i have two full khitai sets and 5500 bori tokens from minigame boxes (I didnt do Bori at all on sin) I have almost full AAs on sin and for me Game Over....because Funcom wont develop new pvp content anytime soon I will go and try GW2 with my old friends even I dont like its settings too much but I will be able to play again with friends and I think its more important than anything else in MMORPG :)

New content are comming too slow! Far too slow. Wathever, PVP or even PVE.
For example, look WoW, Lotr, Rift etc.
These games have much better incomming content in every parts of the game.
What AoC have, adventure pack (without PVP) every hmmm 1,5 year or more.
Seems Funcom have big problems with money. New expansion is too expensive for them or?? I am very concern for AoC future.

When all is done and nothing new is on the horizon its up to you to make your own content.

Exploring and stuff - you have done that.

Try RP - its fun if you find the right people. If its not your cup of tea..

..hm, then there is still the possibility to pass the torch.

Tutorials, gameplayvideos, trainingsessions for new players, passing on what you have learned.

But you have already done that.^^

well I guess you are through, really through. Game over.

Maybe they give you something new with crafting on the horizon.

you can always have one more target:

to be the best sin at server, unbeatable in duels and to revive premades in your guild;)

you can always have one more target:

to be the best sin at server, unbeatable in duels and to revive premades in your guild;)


Been there, done that... gets boring after some time aswell when there is no real pvp competition content :P

try Guild Wars 2.
Much more content than AOC, your level gets downgrade to the zone you play, so you can play all the races content with the same char...
underwater zones (with distinct dinamics),
world vs world 24/7 pvp (really fun) with keeps, castles and real benefits on the no pvp server (there are 3 servers playing each other on a big map, each achievent gives buffs to your real server).
Good stadistics and achievents panels,
good combat mechanics (not based on gear or level, but in your skills)
No need to look for party for everything, parties are not needed and the content scales to the number of fighters)...

So, what I post here is what I think that will make Guild Wars 2 more "scalable" in terms of gameplay experience.