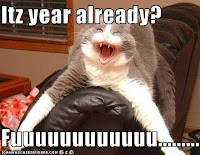 I have that nasty vibe that I used to have few months ago creeping back. Seems like as for now the AoC is back to it's nasty, stagnat stage and it's almost a year of development with nothing really developed for 80lvl pvper.

Seriously we got this:
- easy to exploit pvp system,
- pvp items that are easy to gain through exploiting,
- broken criminal system,
- cimmerian end that failed after 2 weeks,
- combo steps redution (1.3 patch)
- gem nerf (1.3)
- minigames UI (which does sweet fuck all as everyone plays HV as always)

So it is same old same old in Keshatta and as for now we don't have ANY news regarding introducing more pvp content (rewards for minigames? Hope it is not just few extra XPs for skull capture...) or even fixes to major flaws in pvp system.

What you have now in AOC you will have to tolerate for atleast 3 more months (best scenario) and I have to say: there was sudden increase in sever's pop after 1.4, but as for now I can see that AOC is bleeding its player base again. People got in, checked whatever content there was added in 1.4 (I didn't even bother to go to the X, the loot won't improve my PVP in anyway so why bother and there aren't exacly groups LFMing for the X) and after a month they did not resubed.

Another story is that we were supposedly to be bombarded by 1.5 content articles and what we got was two really and I MEAN really CRAPPY interviews (here and here). Those are whole diffrent story: why even bother doing interviews if you aren't going to release any new information? Seriously I had to bombay movie that interviews.
There is a promise for 1.5 patch and director's letter this week, but I am stuck at 80k pvp xp into lvl4, grumpy as hell and doesn't care much for that now.
Posted by Slith at 2:29 PM