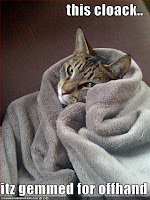 "On the Helm/Chest/Legs of crafted culture armor, the two gems together will account for 22% of the total item's power. On the other three pieces the single gem will account for 16% of the item's total power. We felt that was the right amount of "customization" room for these sets".

The culture armors (our's is named Bossonian, looks good, goes for +20g per pice on trader) have gems slots and new gem changes will allow to tailor the stats for each of assassin's build.

So the lotus/general build can focus on offhand gems as boost to their main strenght, while corruption/hybrid could go for life tap (boost to life leech) and evasive games (boost to already great +10% evade from Prediction feat). Since I don't raid I am looking foward to those gem changes, but I doubt gemmed armour could outperform PVP set.

Here is a dirty little rumor (totaly unconfirmed, pulled it out of ass aka forums): one of other border kingdoms in the future will hold pvp resources for....pvp gear crafting..how about that? EEEH? Sounds sweet to me, but don't quote me on that ;p
Posted by Slith at 9:46 AM