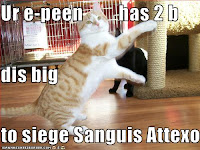 Yesterday I finaly had an opportunity to take part in defending Sanguis Attexo's Battle Keep. Here are few of my observations that I would like to share:
Note: specced as lotus assassin with ambush

Computer can't handle it
Despite of all FC work on AOC performance the game is uber sluggish for me in sieges regardless of settings used. I have bought my computer just for Age of Conan and even if thou it is not best you can get (it is more of a bottom end of duo core speccs) it does handle the game well: 4 GB RAM, 2x 2,60 duo core pentium and Nvidia 8600 GT. In Siege I used "PVP/raid" speccs provided in video configuration and I had FPS of 9-12 when things got messy and 18 FPS "out of action". It was ass.
Assassin's role
In general any other rogue can do our job ten times better. Barbarian can take bigger punishment so they can suicide themself into balista and Rangers give better fire support to the main forces. Assassins die just by looking at zerg. Our stealth mechanic is not unique so we don't have any clear advantage over other rogues while they bring a lot to the table in terms of firepower and survivality.
Curse of lotus and brutality
Without doubt those two feats are KEY for assassins in sieges. I have seen brutality turn the very outcome of a major battle (about 10 vs 10): after initial clash brutality proced 3 fatalities of us - one after another - providing with damage buff that was too much to handle for other side. Curse of lotus is best used to quickly get rid of siege weapon's defenders so rogue group and destroy it unmolested.

In conclusion: we hardly have anything unique to contribiute to both defence and offence. Almost anything we can do someone else can do better. I doubt speccing into hybrid would make any diffrence and would certainly make stealthing less effective.

Should we be able to avoid aoe damage while in stealth for short period of time?
Posted by Slith at 4:22 AM