Obssesing with 1.5 news so you don't have to 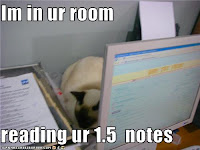 First of all the next letter from the director is right around corner - we will get it at the end of the march (when mr.S gets back from the Games Developers Conference in San Francisco) and it will also be as detailed as the last one with the stat explanation. Next big thing are the "articles" that will feature diffrent aspects of 1.5 update and they will be released during Silirrion's trip to the convention (meaning: around monday perhaps?) and surprisingly there are a lot of those articles written. Since 1.5 patch notes are already put together we can expect the press interviews to FINALY give some new and solid informations.
As for patching testlive server with 1.5 stuff it is not "several weeks away" ,but "soon" and we will get more 1.04.x fixes on testlive and live before 1.5.
In other news the 1.5 might even bring Cimmerian border pvp resources revamp as there is clearly as issue with their respawn rate.
Lots of news coming.
Posted by Slith at 6:11 AM