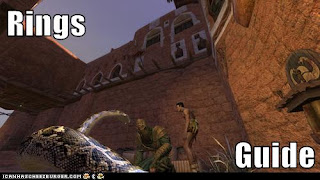 In this post I will continue series on gear with a strong focus on items that are both powerful and easy enough to get. 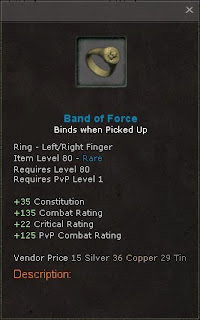 The most basic accesory there is. It can be easily replaced with PVE ring like The Fury of Iziel (which beats this PVP pretty much on every stat). Still it is what it is: low level, cheap, easy to get item. When it comes to power vs accessibility this is the most powerful item that is the easiest to get. Use it till something better comes your way. 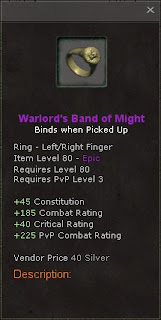 Very good pvp ring that won't be replaced with any PVE ring for the sheer health to damage ratio. It has it all. 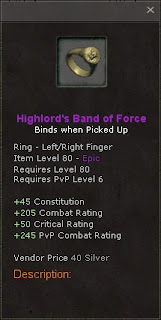 If you compare the stats from T2 ring it almost doesn't make sense to spend hard earned tokens to upgrade your rings to those. Almost. When you will be close to maxing out your gear Critical Rating and Critical Damage Rating stats will become most precious (those are essential to proper build with Master Assassin perk). Having 2 x Highlord rings gives +20 critical rating and it's simply too good to pass up. This wouldn't be high on my priority list to upgrade, but do so eventually. 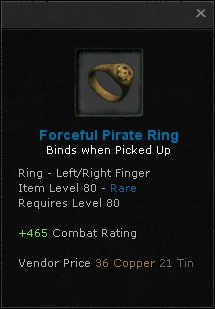 Normally I wouldn't cover blue trash items, but those two have such an amazing focus on a single stat that it might pay off to get them. Forceful ring is just over the top when it comes to raw Combat Rating and it will provide you that DPS boost you might need in dungeons. On the other hand Sturdy ring might be a nice second ring that gives you armor and health you will need to power through some tough melee mobs (like those damn Tamarins in Chosain). 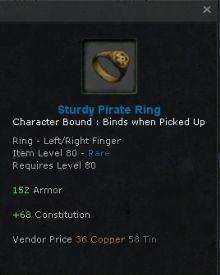 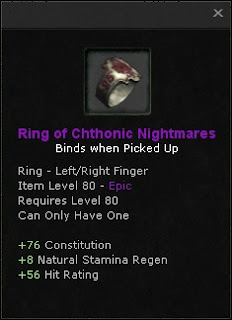 This is a bonus, account bound item that you can /claim as a  reward for getting collectors edition of ROGS expansion. This ring is packed with two stats that are vital to any assassin stepping through the gates of Khitai: constitution and hit rating. Without hit rating you will miss A LOT while mobs will bring punishment that will get your health down fast. Defiantly it's worth having this ring, especially if you are planning on getting a lot of your alts to Khitai (you can /claim this item for each of your character). 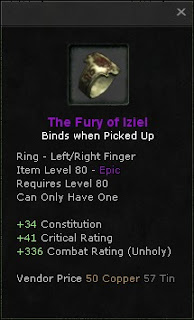 This ring is one of the best non raiding epic rings in the game and certainly the easiest one to get. It's hard to believe that it's dropped in the old world dungeon because it's stats budget is nothing short of whatever Khitai has to offer. Because this ring gives unholy type of combat rating the assassin can take full advantage of the unholy damage debuffs. The cons to CR rating is also mighty impressive. When you are aiming for health/DPS balance (and you should for solo PVE) this ring is the best one to have and in post ROGS reality Xibaluku should pose any significant challenge.

Death's Ward (sold by Brittle Blade NPC) and Devourer's Ring of the Abyss (Ymir's Pass, Amphitheatre of Karutonia - The Devourer).

There is little sense in comparing those rings since those are pretty much the same. If I had to pick one I think I would have went for Abyss because of slightly higher crit rating (every little bit counts). Death's Ward can be bough from NPC in Brittle Blade faction. Since we have all those solo instances dropping rares getting DW is not really at that hard. This is all around excellent ring to have both for solo PVE and when you need all the HP you can in certain raid encounters. Abyss ring drops from last boss of unchained version of AOK and it is pretty damn rare to find. The interesting thing is that this ring is bind on equip so you can either keep it for yourself or sell it for small fortune on trader. 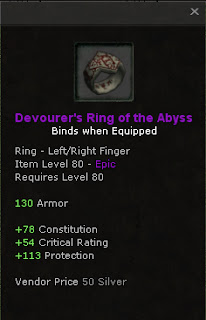 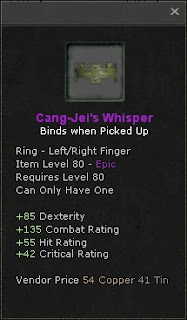 Those two rings are all about DPSing, but are also packed with hit rating which is very helpful in Khitai. The differences are very minor and you can easily get both of them so there is really no need to pick one. Getting the whisper is much faster and easier thou: Cang-Jei will give you are quest to rebuild his temple which is,oddly enough, the road to the center of empire.. Throughout the game many bosses and mobs will drop 37 symbols that you need to place on the ground to "rebuild" said temple. You can get all the coordinations from Khitai Milestones Quest thread. However you don't really need to get different symbol every time since even placing same item 2 or 10 times will update the quest (and you need 37 updates in total). To get best drop rate you can go to Paikang and just keep killing Quillons/boss grey apes/dark legion soldiers/sharks to get their symbols and then placed them on the road and do it again. You should have 37 updates in no time. As an added bonus you can do another "grindy" epic item quest while killing same mobs (I will cover that in the next guide). The bone loop can be simply bought with rares. 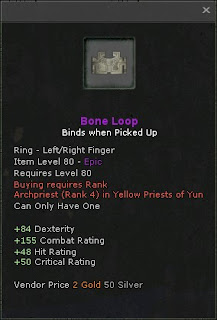 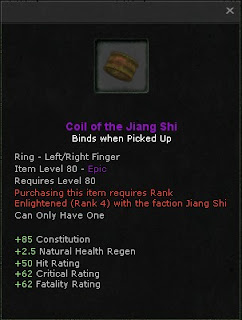 Last but not least is my all time favorite ring which is just jam packed with useful stats.  You can use it with Night Spirits daggers (see previous guide) to get absurd chance to perform fatality and crit rating is always a welcomed stat.
This ring allows for more flexibility when putting different pieces of gear together: you can sacrifice some health on 2-3 armor pieces and still make up for the loss with this ring's jaw dropping constitution. Nevertheless it's more specialized ring, this is something that I would buy last.
Posted by Slith at 1:45 AM

Email ThisBlogThis!Share to TwitterShare to FacebookShare to Pinterest
Labels: Gear

Hello Slith, first of all thank you for your superb Guides.
I just returned to AoC and I keep hard on soloing and you are my reference!
But I have a problem, I read in your blog that it's easy to farm symbols for the milestone quest. I keep on killing the mobs that possibly drops symbols, but they didn't drop any.
Is it possible that FC fix it?
Thanks over again for your very nice blog!
CU next time after the merge ;)

Yes, there has been changes to the Road quest (aka symbols quest) - it is now repetable.

It is quite possible FC fixed the droprate too.

See you on Fury :D