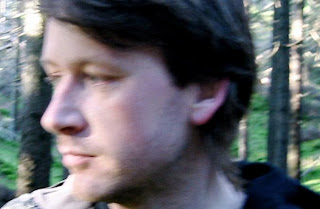 I am extremely humbled to give you the interview with the man who paints Hyboria with his music: Age of Conan's composer Mr  Knut Avenstroup Haugen.

1/ Your musical interpretation of Hyborian era is always spot on so I guess the most important question that I want to ask you is how much do you really know about Conan and Hyboria itself? Have you came in contact with Robert E.Howard's work before starting your Age of Conan project? Or perhaps this was more "learn as you go" type of experience. Were you doing any research into Hyboria yourself or had support from Funcom's lore expert to guide your through?
I have been a Conan fan since I was a kid. I read the comic books and watched the two Schwarzenegger films. I had not read Howards’ stories though, so before I started work on the game, I read all of them. I also got a lot of research material from Funcom of course and we discussed lore, storyline, characters etc. for each area of the game.

2/ While I can imagine that artist creating concept art for the game could have based their works on already existing comics or Mr. Frazetta's paintings, you had to single-handedly craft a soundtrack to a whole world. How does one deal with such a challenge?  Where did the inspiration come from?
I draw my inspiration from many sources. I too get inspired from paintings and artwork: I love Frazetta’s paintings and I studied all the artwork and concepts for the game before I started working. Of course, I also draw my inspiration from storyline, characters etc. – anything that conveys the feeling for the area in question and the game as a whole.  I always find that listening to a lot of music is the best way to start when trying to find a “sound” for a project. I look for anything I can find that might be of help for the project in question, be it classical music, ethnic music or whatever. To find the overall feeling for the score, I think the most important factors are knowing the universe you are going to compose for and knowing what you are trying to achieve with the music.

3/ The soundtrack to the Conan the Barbarian (1982 film) is probably the only Hyboria related musical piece that  pre-dates your work on Age of Conan. Did that soundtrack have any impact on your work? Were you aware of it? Inspired by it? Tried to create something totally different?
Yes, yes, yes and yes :) Of course I knew Basil Poledouris’ scores for both Barbarian and Destroyer (1984). The original 1982 score is one of my all time favourites. A lot of Conan fans also know this music and some feel that this is the only suitable music for anything relating to Conan. The challenge for me as a composer was to retain some of the feeling of the old film scores and to make my score new and fresh at the same time. Because the world of Age of Conan is much bigger than that of the films, the score also needed to be more varied to be able to convey a unique feel for each country. When you listen to them, I think you may feel that both Poledouris score and my score belong in the same universe, even though they are different, and that’s excactly what I was trying to achieve.

4/ Hyborian empires and kingdoms are based on certain civilizations and cultures (even thou in the story itself Hyboria predates our civilization). Khitai is not ancient China or Japan, but rather a mix of Asian culture as a whole. Your music, and especially soundtracks to both Khitai and Turan, really shows that. What is your approach to creating musical pieces to those fictional kingdoms and how are you achieving this unique sound that is a blend of different music styles and cultures?

I did a lot of research into traditional music from the several real-world counterparts to the countries in the game. Like you say, this is most obvious in Khitai and Turan, even though I also did it for the rest of the game. I studied Chinese and Japanese music and instruments for 3 months very intensively before I wrote a single note for Rise of the Godslayer and I hired Chinese musicians as soloists for the score. The Khitai music is actually authentic Chinese music blended with elements of Japanese music and western classical music. For Turan I used Persian music as my main source of inspiration, but chose a more old-school approach of emulating styles and rhythms with a western symphony orchestra (in the tradition of Goldsmith and the early greats of film scoring). For Secrets of Dragon’s Spine I wanted to create a more generic and traditional Conan score and bring the essence of what I believe a Conan score should sound like, back to the game. This part of the game is highly influenced by Russian choir traditions, folk music and Russian romantic and neo-classical composers like Mussorgsky, Rimsky-Korsakov and Prokofiev.

5/ When creating music for the new content how are you working together with AOC's team? Do you begin your work early on and base it only on the concept art/descriptions of the zone or perhaps you begin to craft your music when the zone is in the final stages of development? I guess what I am asking really asking is where do you fit in the the development process.
I always get the chance to see what Funcom might have ready at the time I start up. Some times this is a playable part of the game, some times just landscapes and layouts, but often I get in at a pretty early stage when there is little finished content and I have to base my work on descriptions, artwork, storylines, characters etc.
Posted by Slith at 10:28 AM

YOur blog keeps getting more and more valid with these interviews Slith.

Awesome interview! Thanks for your continued efforts, Slith.

Who's next, Arnold Schwarzenegger?

Ha ha, I have only a very rude reponse to that :D