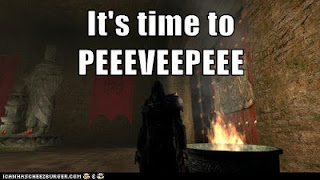 My assassin "grew up" while watching Meph's pvp videos (which I just have to upload some were) and I had this idea for my own pvp vid for a while now. I have decided to finally make it happen and started recording first fights. In this post I want to share my philosophy when it comes to crafting this video: it's all about quality and entertainment.

I don't expect to be finished with the video any time soon because I want produce something that will be fun to watch. It is not about killing your opponent, but rather how you are going to do it. I don't want to give "GC+SS+DWW /lol" type of fights. I think the sneak peak video really shows that. My goal is to entertain you, not to show off skill. There is a plenty better players than me and skilled fight doesn't always mean an entertaining one.


PvP T3 assassin fighting T3/T4 geared Dark Templar with Ibis. In this fight I have abused the fact that Dark Templar's CCs are combo based and take longer to pull of that assassin's so I could keep him CCed all the time. The longer the fight the more armor and unholy debuffs I could put on the opponent to soften him up. The idea was not to take any damage and to really showcase the importance of timing in pvp.

I want to keep the whole pvp video in this style: 1v1 or 2v1 in the minigames. I find that minigame "duels" are more natural and interesting pvp encounters than "Kheshatta duels" (it's what most pvp videos are). In minigames you might not have the upper hand and element of surprise (like in open world pvp ganks) nor the luxury of all the cool downs ready (like in duels). The added benefit is that you will be fighting people that are already geared and activly trying to kill you. And, obviously, it's easier to get a lot of great footage in minigame because there is so much pvping going on.

I want to keep the editing to the minimum. If the fights are not interesting on their own then no amount of crazy effects going to change that. I am also collecting unique and fitting music for the video so it won't be Rammstein/P.O.D/Requiem nightmare (overused music is overused).

Also I want to put a little background story to the video (nothing major, just a fun little thing) and pay a tribute to the other assassin pvp videos that I liked. For example in this video I am referencing music from certain assassin's video and later on I will also use a little bit of his footage (can YOU name that assassin? :D It's not Meph ;p).

That's pretty much it, expect the video when Moses comes back.

By similar way I have recently arranged to kill PvP 7 DT as HoX in LT when he went solo for flag and I defend it. Timing... CC... avoiding dmg than back... CC etc. it took me more than 2 minutes as I used my demon form twice but I finaly did it with fatality :)