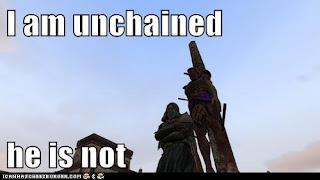 So the new letter is in and we have learned about next pvp content: unchained minigames. The final design is not yet written in the stone but we got pretty good idea what we are getting: minigames (new mechanic but same maps) where people get equal gear and most likely further balancing options (like AA to spend for the game's duration - but that is just me talking).

I have thought about this and I think I have made up my mind that I very much like the core idea of it. Having all 3 pvp sets, maxed out AA and capped at pvp lvl 10 (done with minigames alone) I am pretty much in a same spot for several months now. For me "unchained" minigames are already happening. At the same time I can't really say I like pummeling undergeared players nor losing to T4 geared people. I think that for me getting pvp gear was never about having an advantage, but rather to avoid being at disadvantage. Since PVE T3.5 and T4 pretty much outclasses pvp gear in every way I get to only keep my advantage over "newbs" while not having a way to shorten the gear gap that is between, oh let's just say pvp T3 weapons and T4 weapons. A hint: it's absurd. In other words: current minigame system doesn't provide me with what I want.

There are several issues here and I want to quickly go over them:

The social aspect of pvp
I have spilled my guts about it here, so please go check it out. Current minigames are social nightmare and the fact that you can't do it with friends is mind blowing in the context of MMO. If the unchained minigames are to be successful Funcom need to put "group" back into "group pvp". Right now it is random strangers trying to make the best of it. I want to play with people I know. And this doesn't even require coding: just roll back whatever changes previous Game Director made (and truely this was one of his undoings).

Accessibility
AOC has one of most brutally unforgiving, gear based systems you can imagine. Pretty much pvp lvl 1 melee is a meat in pvp and will remain such for many many pvp lvls to come. Before you can even be competitive you need to do A LOT of gear grind and in a such manner that you won't really enough (like 20+ deaths per minigame). Having a way to simply jump in and be able to take a punch like others will surely encourage more people to pvp and perhaps will draw old timers back to the game (no need to play "gear catch up" anymore).

Population split
I doubt there will be any split happening. In a world of equal gear unchained minigames and regular minigames what is there to gain in regular minis? Why would anyone expose themselves to the T4 wearing people when they could be facing players on a equal footing?
There are still many unanswered questions about this system and one of them is the question of rewards: will unchained minis give same rewards? No rewards? Why would someone do unchained minis and regular ones? I am very much afraid the unchained minis might share the fate with B&G server which seemed like a great concept, but was pretty much rehashed old content... minus the guards. New minis? Same thing, minus the gear.

Still we have to learn a lot about the design and also we need to keep in mind that incoming pvp crafting (which is months away) might totally change the pvp landscape and how people are playing this game.