The streets of Old Tarantia #1 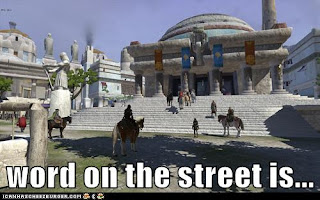 I have came to the conclusion that I have been posting very little as of late. There is a good reason for that: lack of news. Duh! Still there is plenty going on in my Hyborian life so I have decided to start posting those random tidbits on the hideout.

The latest and greatest thing is me getting on the mats required to craft the Spine of Dagon - T3 dagger. It literally cost me my Hyborian life-time savings. I wasn't much up for shard gathering so I bought them. 400 gold. BAM!. Now it's only a matter of my guild getting it's shit together and we are on the easy street to T3 craft.

Or are we? After speedy advance in the T4 (we killed imp 3 times) we got demoted to T3 raiding and even struggling at that. I know, the summer is upon us and it's hard to get people to raid, but is to frustrating to have 4 or 5 weapons to craft all lined up and simply not enough people to do a mere T3 raid. Bah!

In other news I am enjoying pvp a lot more since I have started recording my 1v1 fights in the minigames. I have also fleshed out the little background story that will be in the pvp video (more of a cut scenes than story TBH). To my surprise the server move to US didn't really impact me all that much. Sure, when I look at the bar the latency is higher (around 176 max, usually at stable 126), but at the same the the server stability improved (no more red lag spikes) so it balances out. I have Fraps running in the background and still getting really good fights. I guess it's fine and, of course, it was necessary to insure future for Age of Conan. And it's not like old EU server was all that great either. I do understand that some got more affected by this than others, but what's done is done.

But let's get back to the pvp video for a second. I have several folders with videos named "special", "cut scenes", "2v1", "bad", "good" and "pro"."Special" is a place for a videos that have some part that I want to use like killing people with an xbow (truly, it's the king of frags). Cut scenes are self explanatory: it is the footage I will use to tell the background story. Folder with 2v1 fights....now I am not sure if I will be using it because those fights, even thou I have won them, are just sloppy. It's really hard to stay calm and precise when fighting 2 people at once and one mistake can mean the end of the fight. I do like the end result (winning against 2 people) but I don't like how I am performing (lot of combo steps and combos missed). Bad and good folders are for storing fights that are either really sloppy, boring or simply too short (usually it's vs casters). I will probably pick few movies from "good" folder and use some parts of from "bad" for intro or what have you. The "pro" folder contains really awesome fights like killing T4 barb or DT. Right now I have 4 fights that I am really pleased with and I think I need no less than 10 in total to make the video. I have decided to keep recording until end of July and start editing then.

And today AOC turns 5 years! How cool is that? Old love never rusts it seems. I will write a detailed report on anniversary event so I don't want to get into this topic a whole lot here.

Hey Slith! I just bought 2 asuran daggers and I'm gonna use them both, which gems should I add to which one(considering I'm gonna use both of them)?

One bel's mirth and the second gem green damage ones

thx for the fast answer. By damage green gem you mean the "zath venom" one?