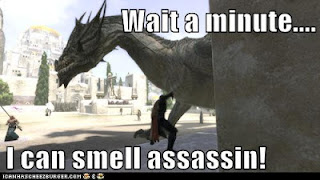 Look, I don't want to oversell this event so I will be blunt: Joel Bylos is godlike and the event was best thing that happened to AOC. Oh, too soon? The event matched the player base expectations which were so low that we would be quiet about another vanity cloak. But no, Joel had to bring in the big guns and he delivered one hell of a event. This is the first thing that I want to give notice to: Mr. Bylos proved himself to be very competent which gives me A LOT hope for the future. Honestly, for a while after the restructuring I was fearful that AOC will be Funcom's bastard child and such is just not the case.

Let's get down to what the event was actually about:

It very much felt like someone read all my posts on previous events and decided to change everything I have complained about. This event had epic feeling, great rewards and replayability. Pretty much everything that, until now, sucked about the events.
Remember the first anniversary? You can check it out here. Or just watch the video below, it sums it up nicely.
Now the video from the recent event:
See the difference?


In a nutshell: everyday new boss spawned in different location of Hyboria. Furthermore the bosses from previous days would re-spawn stronger and stronger as the day went by. You had to be close to the boss to get a quest from killing it, so this way you could have brought your lvl20 alt and still get the goodies. After killing the monster you would go to the Old Tarantia where new NPC would accept your quest and reward you with a box with rewards. First major surprise was that NPC had a voice over!! Remember those? Game Director promised that those will be back (TSW voice artists are doing AOC stuff now) but no one expected for it to be so soon. Now the rewards themselves: the box could give either random crap like Halloween consumables (blood, brain juice etc.), epic mastery pots (like in HOC), unique vanity gear or..... T2 armor and weapons!!
Best thing is that you could do the bosses over and over and get a blast out of it. On the last days the bosses were spawning in different places so whole raids of people would jump from Old Tarantia to the Dragon's Spine only to be storming Khemi a couple minutes later. It did wonders for the server's population and morale because seeing so many active players in one place really gave hopes for the game's future.
If I really HAD to complain about anything it would be a lack of story. Sure there was SOME story, but pretty much it was: "thanks for killing teh dragonz0rz, here is ur epix0rz!". I think giving people small quest chain few days before the event would have been awesome. We didn't really get any explanation WHY there was a dragon and Tarantia and Kraken in Khemi and these quests would have builded up the anticipation. But it was all well designed and executed (Mitra knows we didn't have THOSE kind of updates in recent years..).

Best thing that came out of this event? The bosses are here to stay and the GMs will spawn then randomly for the player's amusement.

Here is to another 5 years!! Cheers!

Too bad I didn't had time to kill more than one boss, but the video that compare this anniversary to the first one is hilarious.