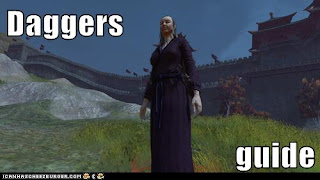 In this post I want to start a series on gear with a strong focus on items that are both powerful and easy enough to get. Let be honest: you are not reading this guide because you have T3 crafted dagger, you are reading it because you don't..

When it comes to picking your dagger you want to check out this guide which covers main hand/offhand mechanics.

Very well balanced dagger. It's not an ideal main hand weapon (too low base DPS), but as offhand weapon it will serve you till you get a very high end replacement like pvp lvl 10 dagger (even pvp tier 2 is not better as offhand).

It used to be a much better weapon pre-stamina revamp (because of stamina tap rating), but like I wrote: it will do great as offhander.

Assassin really needs access to good weapon right from the beginning of his pvp carrier (who doesn't, right?) so I would go as far as buying one dagger from in game cash-shop to ease up your bumpy road to pvp lvl 5.

Clear replacement for Skirmisher Dirk as a main hand weapon. It's pretty bad at everything else. Since it's a mediocre weapon I wouldn't get more than one, just keep using Dirk as offhand and you will be good.

If you don't have a good alternative this dagger can be a decent PVE dagger because it has such crushing raw DPS advantage over other non-raiding pve daggers.

While being good upgrade to both Warlord and Skirmisher this weapon, even thou it requires max pvp lvl, it's still overshadowed by any PVE dagger which is Tier 3 crafted or better. High critical damage rating of this weapon makes worth it to get two of those, especially if you are using master assassin perk and critical rating build.

If you are non-raider then this is the best stuff you can get. You will be competitive in pvp, but far from the numbers T4 daggers can give you. 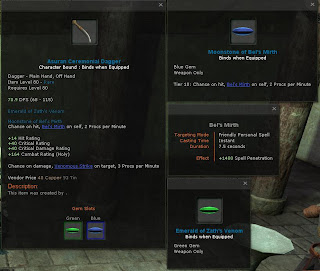 All around great dagger. If you can get your hands on this weapon at low price (ask guild mates to craft it for you, provide mats) it will make an awesome offhander for a long time. Getting Bel's Mirth gem in this weapon is mandatory because it will give you a fair proc chance that will grant you +1400 spell penetration. Meaning? Big ass soul detonation. Without this gem it's just a blue weapon. 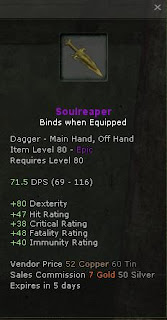 Those 3 daggers have two things in common: those are random drops from bags/chests and all are overpriced as hell in trader. In reality those have about 20-30g worth to them (and that's being generous), but are sold for 100-150g. Absurd price, do not pay! Those daggers have poor stats and will be replaced very fast. 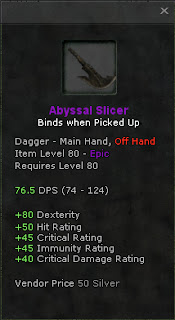 Probably best dagger for new assassins. Easy enough to get and with a rough power right from the start. It drops in the new unchained version of AOK (last boss). The immunity rating on this dagger is pretty bad stat, but base DPS makes this perfect main hand weapon. 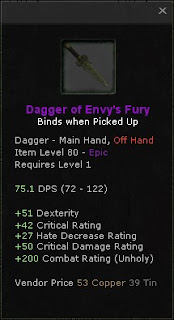 This is a quest reward for killing one of the tier 2 raid bosses. Can be done with a PUG group. If you had to raid once in your life this would be a weapon to get. Pretty much perfectly balanced dagger with nothing, but useful stats. Unholy combat rating actually gives you more damage that it says because you will be debuffing your target against unholy. Great offhand dagger to go with Abyssal Slicer and you can get them both in a day (if you are lucky). Since Envy's is a quest item you will always get it if the boss is killed. Sadly that also means you can have only one.

Edge of the Night Spirits (sold by NPC, Hyrkanians faction)

So far my favorite weapon. While the base DPS is far from being impressive the rest of the stats are pretty amazing....if you get two of these daggers. When paired up these weapons grant unparalleled critical damage rating, offhand rating and fatality rating. When supplemented with this build, full epic brittle blade armor (for offhand rating and critical damage rating) and this ring (for more fatality rating) you get absurd amount of offhand and bonus critical damage with a very high base chance to proc fatality. Those are not cheap to get and you really need proper gear set up to get the most of it, but when you do it's pays off big time.

As a bonus those dagger have a wicked, very unique look to them.
Posted by Slith at 11:45 AM

Email ThisBlogThis!Share to TwitterShare to FacebookShare to Pinterest
Labels: Gear

You are recommending the Emerald of Zath's Venom and Moonstone of Bel's Mirth gems for the Asuran Ceremonial Dagger. I heard that Zath's Venom did not proc often enough to be of any use. Is that your experience?

I gemmed that dagger when Zath's Venom sorta-worked. I would gem it now, go straight for damage gem. It was just the only screenshot I had and the only one I could find.

Bels for all builds.

Assassin's unholy damage comes not only from the soul detonation, but in fact mainly from Corrupted Blades and that feat is mandatory for ALL builds (adds mere 2757 unholy combat rating).

Bel's, even post-nerf, is just too good to pass up.

Which is a a "green damage gem"? isn't Emerald of Zath's Venom one?

Hey Slith! I just bought 2 asuran daggers and I'm gonna use them both, which gems should I add to which one(considering I'm gonna use both of them)?