Dagger and a bowl of rice ep.10: Jade Citadel 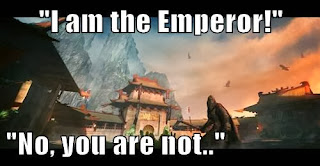 I would have never thought that I will be posting anything in "Dagger and a bowl of rice" series after the Final Word post. Three years after the realise of Rise of the Godslayer I find myself in most unlikely place: the Jade Citadel, a Tier 4 raiding zone.
Why unlikely? I swore on Mitra many times that I am, at the very core of my being, a PVPer and not a Raider. Given the choice between Raid content and PVP content I will always go for PVP and doing raids always goes with it's PVP applications in back of my mind (in short: I need them PVE weapons). Since I am currently presented with no new PVP content (and this trend with continue with oh-no-so-innovate unchained minigames and lolwut?-Hyborian Race) I have decided to take raiding for a spin. Surprisingly I have enjoyed it and almost as much when I was struggling at the 1st boss with previous guild or when I was part of unstoppable force with my current guild, cutting down all bosses on 1st attempt. However this post is not about how "I am doing raiding because there is nothing else going on" (you might get that impression) or because I want PVE gear for PVP (I am hoping upcoming crafting will solve that once and forever), but rather it is about how Jade Citadel is just
a delicious experience in general.

In Age of Conan the Hyboria feels very "segmented" because each zone is pretty much a different part of a huge world. That is by design. In ROGS the team moved away from that concept and made each zone close to each other so you can move between them almost seamlessly. The other nice change is "what you see is what you get" philosophy that pretty much boils down to player being able to explore, in one way or another, whatever is visible on the map. And so the first time I have laid my eyes on the Jade Citadel I knew that one day I would like to go there and boss the Emperor around. And so I did. This is my story:

I really like the open spaces that are present in first 3 encounters. The fight with the General feels very epic and there is just so much stuff going on at the same time that it makes me feel small and insignificant, just another cog in this grand machinery of war. 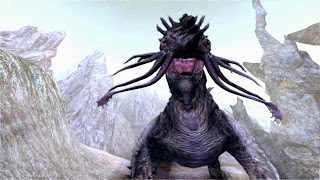 Next is Basilisk which is really relaxing to fight as it is not a very demanding boss. The visual design of the Basilisk always fascinated me because it has this very weird and alien look, a total departure from classical lizard-like creature from the myths. Using ballistas to pummel the boss is also a nice touch and it adds that little bit of spice to otherwise pretty uneventful fight. 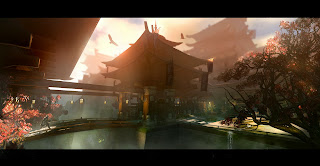 The imp that dwells in Citadel's garden is a swift change of pace after General and Basilisk. Clever mechanic and interesting looks of the boss, packed together with stunning visuals of the garden itself creates an unforgettable experience. Because the boss room is split in two the fight feels more up close & personal. 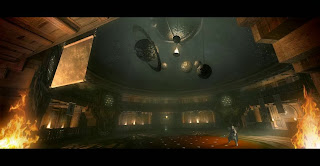 Zodiac is the ultimate puzzle boss that requires great amount of focus from the entire raid. First time around I got "carried" through this fight by the whole raid because they allowed me to just stand next to tank and DPS away. Second time around, however, I was expected to contribute in more meaningful way, by actually helping with the puzzle itself. I had to memorise 4 spots to stand in and needless to say it have proved itself to be quite a feat to perform when you have only few seconds, can't mess it up and you are in a room that makes you easily lose your orientation. 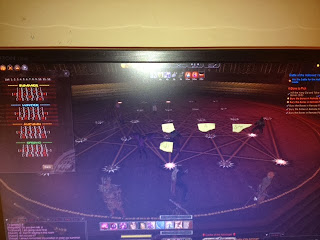 I think you will agree that I have found a rather elegant solution. Yes, those are sticky notes placed on my monitor.All I had to do is stand in the same place every time and the proper spot to move to would be indicated by a note. Genius! Well, no, but it did the trick.
I am feeling very humbled that I can be a part of this raid team because I can only imagine the grueling hours that it must have taken to crack this puzzle, learn it and then perform in a constant manner.
I didn't have to do it so it feel like "cheating" when I can have the opportunity to take down Zodiac on thefirst try, without much of an effort. I know it is only because the work raid team have put in when I was jacking around in minigames. 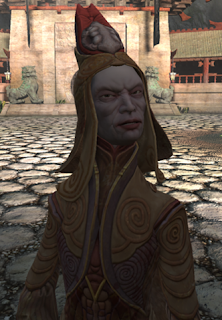 Next stop is pretty funky fight with the Emperor in the court yard. I was baffled by Emperor's appearance: he looks like a GIGANTIC NERD, and that is coming from a guy who actually, indeed at this very moment , writes an Age of Conan fan blog. The fight is pretty OK, but the "mightiest sorcerer of the east" is an gross overstatement.

The memory cloud is probably the most genius part of the Citadel as it reuses old world locations. It felt weird to land on the beach of Tortage as lvl 80 assassin and then re-visit Strom and his merry band. The fights are entertaining, but I didn't like the trash mobs all that much. Granted, T4 is almost trash free compared to other tiers so I shouldn't really complain.

To sum it up I would have to say that I am very delighted with T4. Having some little experience with T1, T2 and T3,5 and completing T3 I have to say that T4 offers fun and balanced content that is topped off with a story that is worthy finally to a very well written Khitai saga.

What about Entity? Well, that is still on my list.
Posted by Slith at 7:56 AM

i see a glimmer of the pver in you. embrace it, nurture it, become one of doers instead of the followers, cast aside that daft concept of pvp that has long been discarded by funcom itself...

ha ha, well I am not leaving pvp (evidence: pvp video one post above :X), but I got bitten but raiding bug for sure.