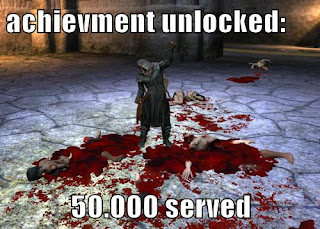 It is next 10.000 already? Damn!
Not only I have rounded up my kill score to the whooping 50.000 but also finished capturing all the footage for my pvp video (currently editing it down).

So how does one feel with 50k on his hands? Empty. That's right, I am not really all that pleased or proud of it or whatever. Why? Nothing to be looking forward to.

Last couple of months my pvp was fueled by my passion for making a pvp video and minigames - to be honest - were all about getting that sweet sweet kill and capturing it via Fraps. Now that the project is done (at least some stage of it) PVP seems, again, a little meaningless. With crafting pushed back the only things we have on the horizon are unchained minigames and ridicules "The Great Hyborian Race" .

I was fully expecting a new, creative juiced to be flowing through AOC's veins, but we are still getting highly Funcomized content which I am calling "old stuff, minus something".

Blood & Glory server? Old pvp server minus guards and Bori.
Unchained minigames? Old minigames minus gear and AAs (yeah, giving out all the gear is pretty much taking it away).

The Hyborian Race is so stupid that it makes, in retrospect, PVP World Bosses seem like a grant idea.

So in a nut shell The Hyborian Race will be a race to lvl 80 and highest pvp level over period of 3 months on a new B&G type of server. After the event is over the server will get removed and all the existing characters will get moved onto old B&G server (post mergers it will be Rage server).

This is "content" that requires you to pour hundreds of hours into new character if you want to be any were close to competitors. In the end of the day the race will be won not by the best pvper , but by a man (or a teenager most likely) that will dedicate most time to the endeavor. You cannot out-pvp-lvl someone that might just be average at pvp, but still has the time to simply pvp more than the rest. Racing to lvl 80, on the other hand, will be a PURE form of re-doing content (and for some: re-re-re-re-re-doing content).

This content is pretty much a big nothing that  supposedly won't take any resources to create.
In other words: if we set the expectations at rock bottom we cannot fail.

The Hyborian race, for me, is pvp equivalent of horse racing track: no one asked for that and devs are delivering because its dirt cheap to deliver.

But there is other issue that is bothering me more and more: Game Director Nusquam attitude on forums.

While I appreciate that Game Director comes to the boards with replie,s more and more so some of the posts are just cracking wise at paying customers.

I personally don't enjoy this "forum buddy" attitude in Director Nusquam and posting "lols" in replies along  pretty much "you don't like the game then quit". That is the kind of stuff that I can get from other forum posters, I don't think it suits paid professional with high position in MMO industry.

That is something that I actually admired in the previous guy in charge:  Silirrion . He didn't post on forums very often (but he did reply on twitter quickly), but when he did he would take all the pitchforks and torches and cotton candy like a champ. I understand that no one wants to be personally attacked (and that DOES happen on boards), but professionals are expected to maintain their professional integrity and for me that is NOT getting into forum flame wars with paying customers. Granted those customers might be rude fucks, but still they are paying YOU to provide service.

This Hyborian Race thread reminds me a lot of old [Petition] Stop developing the PVP Wolrd Boss thread and I think Silirrion handled it well: he posted a lot and still defended his stance on bosses, but there was a professional politeness to his replies.  Nusquam is just rude.

Anyway I wanted to get this off my chest, weave my epeen around with 50k kills and get it out of the way for the big interview I will be posting next week: exclusive with Gaute Godager - AOC's creator. 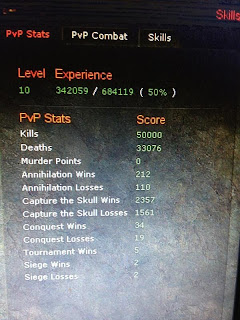 cannot wait for interview with Gaute!

Really Slith, while I can't understand the point you're making, I seriously don't know why you seem so bitter regarding the hyborian race.

Sure I can see why someone could be bitter regarding the general state of AoC pvp, but already spitting on the race ? We know nearly nothing about it. You sometime seem to purely make assumption out of nowhere. 3 month ? Reward only the guys who spent more time and who are the first ?

Come on, the truth is that we don't know how rewards and race will be shaped. Hell, Bylos probably don't even know for sure himself.

It can actually be great. We don't know what will be taken in account. Sure, it will probably have a reward for the first to top level, but I highly doubt it will be it. We will probably see other challenge, reward or way to play, but based on what ? Best efficiency time/progression ? K/D rate ?

I can provide a hellota fun, even if you don't aim for the top.

Race is a content that I simply can't get behind as it is a lazy solution to a serious problem: lack of pvp contant.

I cannot get excited oved re-doing 5 year old content and I cannot imagine calling it a "pvp content".

Moreso this is pretty much B&G server that will be around for 3 months. Many said B&G will fail because it is nothing new (just old content minus guards) and there were those who defended B&G vigoriously saying that "it could be fun". Where are B&Gs now?

I was also spiting on World PVP Bosses and calling Bori "bullshit" when previous GD was saying: "its working GREAT!".

It really doesn't take a sage to forsee what will stick and what will flop in a 5 year old game.

But hey, its just my opinion.

I don't think it's even to be regarded as a solution to the lack of PVP. Even if I agree completely with you on your point stating that it is just "Rebranded old content, not new one", I think this could be a very welcome temporary fresh breeze. At least for Crom, since PVP is basically only limited to mini. I can totally understand that PVP-servers player are more dissapointed than PVE-server players. (We basically never have open world pvp with crowded pop, but you do.)

I obviously might be wrong, but I see it like an event, pretty much like the 5th anniversary stuff. It's a few week long, it's not something that will be left to rot and deserted progressively. It's indeed lazy because it's not time nor resources consuming; but, hey, that's the point of an event.

PVP schedule didn't change much: it still a new mini map and unchained mini and more and more mini. You can be dissapointed at that, but I don't think Joel presented the race as "the future of pvp". If you think this race is designed like the "new pvp orientation", you are right to be upset, because one would be a fool to tag that as a "solution to the nearly death pvp". But if you see the Race as a one time event (that is not supposed to be the messiah of pvp), then... Meh, why not ?

So, yhea, the problem of the pvp shortage is still there and you have the right to complain, but I don't think it have much to do with the race event, which is thought to last only a few day/weeks.

Then again, as you say, it's just my opinion and I don't want anyone to think it's a divine thruth.

You clearly dont remember when Sillirion in a pathetic attempt to hide his/their incompetence, acused the playerbase (his customers) of being the responsibles behind the siege crashes, that made sence...

Straight up professional attitude right there.