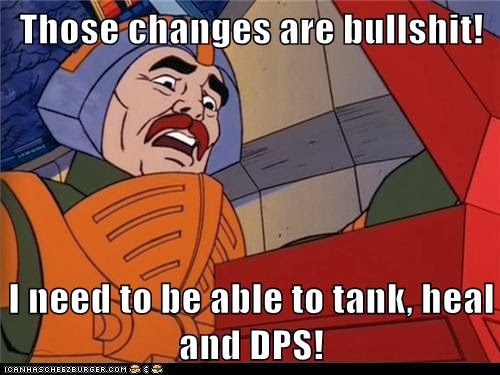 The man that fears no one (especially PVE players) - CirithGorgor - posted a thread that I thought we would NEVER see on AOC forums: Official Thread - Class Balance Tweaks.

Here is a re-post for you non-subers out there:


It grew into 500 pages long festival of blames, half-baked theories and wishes. That and PVE crowd coming to complain that every single change will alter the game and the very fabric of reality it self in a ways we cannot imagine (and will probably also cause polar shift, the dead rising from their graves and VAT tax going 2% up).

Mind you it is great that we have such thread and that people participate, but some are just here to spread the hate - while stroking their soldier mains saying "my preciousssss"

I pity any and all dev that needs to go through this thread :D

So what is the state of pvp balance in PvP? Well, it is more or less NOT BROKEN. See? I am not saying it is balanced, it is not broken so every class has a shot at every other class and a realistic chances of emerging victorious from the encounter. It wasn't always like that. I remember how back in 2008 I couldn't kill certain Conqs because of .... bugged cunning deflection. And combo skipping, remember THAT? How about insta-CC spells (the OPness era of 1.6 assassin)? And how about no global immunity to major CCs? Yeah, that assassin charge + root + instant snap kick knock back + skipped GC and DWW was hell of fun, right? No, not really. Oh and remember STAMINA ISSUES? Instant respawn that allowed to pick up flag on spawn till the end of minigame? I could just keep going, but it would all point to the conclusion: In my humble opinion things are most "not broken" since ever.

Now to the balance: what is balance? How do you define it? My take on it is to state that "balance" in which classes are performing similar in terms of their function as archetype (rogue, priest, soldier) and are close to requiring same amount of effort and taking similar risks to perform well in PvP. Assassin, and I hope there is no argument here, is a true glass cannon as it can deal a lot of damage but he will die fast. Balanced? Close enough. Dark Templar deal less damage, but his damage to survivability ratio is off the charts. In short: Dark Templar can fill in the role of damage dealer while still being a superb tank. Assassin can DPS very well, but can't tank shit. So while Dark Templar might take similar effort to land combos and DPS down the enemy (or even a little more effort than assassin since his damage IS lower) his survivality is unmatched and so he takes very little risks.   The problem is that solider classes have lost their archetype focus and became "rogues in armor" having a raw damage to take down a cloth armor user while keeping the HP pools and mitigation of tanks.

The changes are needed. Hell, I am even for gutting assassin class down and changing stuff around too! I hate stagnation and if anything is going to get us closer to "balance" is continuous trial and error which is the only path to the game's improvement. I am all for it. And if CirithGorgor need to upset few players to get the game moving in the right direction then so be it, you can't make an omlet without breaking few eggs. Besides, EVERY SINGLE DAMN CHANGE IN THE LAST 5 YEARS always got people upset even if the results were noting but positive. Respawn system anyone? People were SUPER upset about it and threatening to leave the game and all that and yet.....do you even remember how old system looked like? Me neither.