Back in the T4 raiding saddle 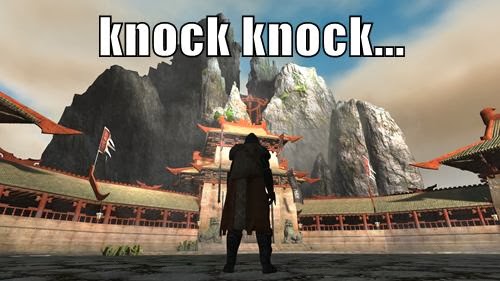 Recently I have lost my T4 raiding drive. PvP changes might have played a role in this: current pvp T3 gear soon enogh will be a match for pve T4 and PvP T4 will be better anyway. But raiding is not all about getting gear for pvp (at least not any more) and I did enjoy it untill, well till I realized there is no way I will be able to complete my gear any time soon. I would say my assassin is fairly advanced in pve gear: T4 chest, hands, shoulder, 2 x rings. So what went wrong? I can raid only once a week. Sitting my ass in front of computer for 3 hours straight is a big commitment. This is why I like pvp so much: you can log in for your quick mini and be in & out under 20 minutes or less. There is no way I could raid more than 1 night per week and weekends are out of the question. This meant that I couldn't do  Entity (needed for tears tokens and weapons) or Cloud farm (also needed for tears and weapons). To add insult to injury Entity raid, it its game design glory, makes melee character absolutely useless and thus the need for having an extra alt char (caster/ranger/healers) geared and ready just for this boss. I was like "fuck it", I have one character and some shitty T4 design won't change that.
The above mentioned "cloud farming" was also a subject of some pretty heated debate: for years now people with their under geared alts could be invited to Cloud farm and be able to get T4 level weapons and accessories for beating some mediocre bosses (aka being carried through raid by their geared guildies). This resulted in pvp lvl 1 characters swinging one of the most bad ass weapons in game which were, at that time, vastly superior to pvp T3 weapons.


Game Director elaborated about this on forums:

So not only easy mode Cloud farm is the thing of the past, but also I can resume my T4 regular raids and FINALLY be able to complete my armor with dragon tear drops and upgrade my shameful T3 and T2 daggers with their T4 counterparts. I won't get the BEST stuff, but when it comes to PVE I am more than willing to settle for a second best.

I want to complete my T4 gear for the new raid which, hopefully, will be something above T4.
Great changes Funcom!.
Posted by Slith at 9:51 AM

You use tier daggers? What are you, a noob? ;P

30 You should respect a player that have given so much to the AoC community!

I have T3 and T2 daggers, like I said I don't do cloud or entity, I din't have a chance at getting anything better. Now is my chance :D

and Noumides chill, we are all fun and jokes here :D