No other game does the things AoC does well 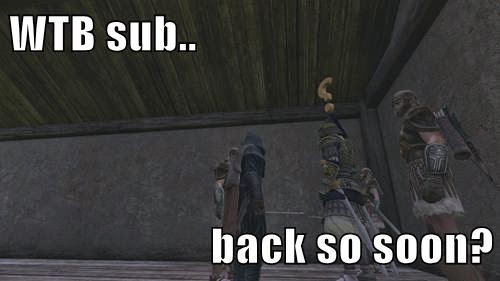 Two things happened today: I tried The Elder Scrolls Online early access and Game Director for Age of Conan spoke the truth and got scolded for it.

Playing ESO for the first time it became painfully evident that it's not Age of Conan (which it's not supposed to be), but also...well, it doesn't really measure up to Age of Conan. To others ESO has nice graphics, rich lore, voice overs in quests, interesting combat system and diverse classes, but for me graphics don't really matter, I couldn't find it in myself to give a poop about elves and voice overs in boring quests aren't helping things. To top it off the combat brings nothing new to the table and it's pretty much a point & click experience with occasional blocking and a dodge. While I was pumped for ESO exactly how I was hyped for AOC it was AOC that really glued me to the monitor while ESO felt more like "I have to give it a fair shake, I paid GOOD MONEY FOR THIS". Money well wasted I suppose :X Needless to say I am re-subed to AOC and crawled back to Fury server with a tail between my legs.

To give credit where credit is due ESO had a smooth launch for me, the experience was bug free and the game seems polished. A well made product...just not for me. Since this was the only game on the horizon that had any potential as my AOC successor it is pretty clear that I am here to stay. AOC has it's painfully evident shortcomings... but then again.. No other game does the things AoC does well. Truer words were never spoken.
Posted by Slith at 1:34 PM

It is very unusual decision, only after one day of ESO. Did you pass through PVP, crafting? Did you found guild? Did you made any frandship? Seems no.

Seems you have problem with AoC nostalgia. I really cant belive that you will leave ESO i resub AoC and only play 5 PVP maps again, again, again without ANY CHANCE TO GET ANY NEW PVP CONTENT!!! Yes, you will play these 5 PVP maps against same people and AoC will lose more players from their low population since ESO started.

...and as your long time readers i really want to read about your new adventures, not about quests in Kara Korum or "BRAND NEW ZONE" Dragonspine.

Oh I will give ESO few more tries for sure, but I was hoping it would pull me in just like AOC did - instantly.

Y not playing both?

While you advancing in TESO you do some nostalgic brakes in minigames of fury...

By the way I never liked TESO. I really tried to like it but as you said... "It's not for me".

But I am highly looking forward to try the european release of Archeage (they say soon in 2014). Oh boy... thats really looks promishing!!!

ESO is a game which will hook you overtime. I've had your very same feelings during the whole beta, yesterday logged in game and found myself unable to logout. I went through the story I fought enemies... Give it time, play it your first month, but don't compare it to AoC as they belong to different categories of game. It has more to do with GW2 than to AoC ;)

I am re-subed to AOC but I will dabble with ESO some more. Maybe it will grow on me.

Sadly so far I was honestly bored and found myself actually forcing to do one more quest etc.

I really wanted to like ESO, probably more that I should have :X

Combat system AoC has the best I have ever played and no other game has come close to it ever since.

I loved AoC but after bori and well the lose of my account I gave up the game shame really I had some the best times in my gaming history in AoC.

I leave Aoc (maybe you remember me Slith from Clan of the Free City, Sakkhara the sin that raided with you) some months ago. Im not playing anything right now, but that answer, no other game does the things Aoc does well needs to added that no other game does things worse that what conan does worse. Playing with a sin with 270-350 ms cause funcom decided to move the servers to USA is something that no other game has done yet. For me it was lack of content. I have three characters full T4. And its no really a problem doing the same minis again and again, is fighting again and again the same other players.
Cant see a bright future for this game. And i didnt see a reason for resub. Any changes will arrive so late that few wil be interested.

Well Sakkhara, some of us are just doomed to play this game.

Perhaps something good will come out of this, or perhaps I will remind a weird nerd that plays some obscure decade old mmo that just refuses to die (against all odds).

Reading back over some of your old posts as I find myself drawing back to AoC after trying ESO beta, trying GW2, and I have to say this post rings with me. ESO had the epic world PvP, the great crafting, the mobile combat, the beautiful setting, and the storyline backed by some decently strong lore.

But it can't scratch the itch that AoC scratches. I may not resub, but I will be redownloading AoC to see how the class changes pan out and create another character or 3 to play all the classes. Just because AoC hit all the right moments in my mind.

Yeah AOC is a weird beast. You know what it doesn't have and you can easily point finger at it (like dungeon group finder), but at the same time you know AOC "has IT" and you can't really put your finger on what "IT" is.

But that "IT" is AOC's secret sauce and it makes it delicious.