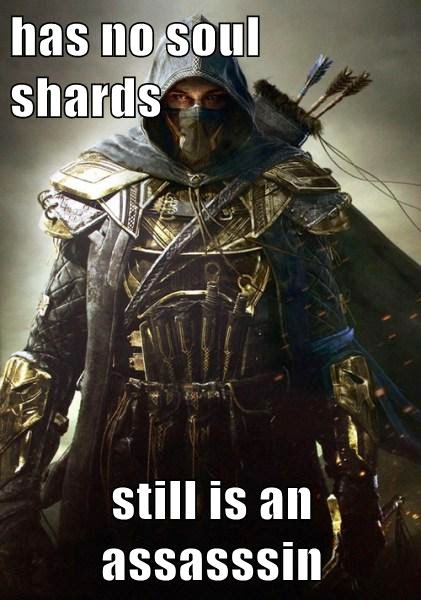 No soul shards? If anything that is GOOD. As you can see I jumped on The Elder Scrolls Online bandwagon. I wanted to share my thoughts about it and what is means for my involvement with Age of Conan. For five years now I have been dedicated to one MMO (and my only game of choice at the same time) and I am starting to feel like it is time to move on. It is not because there is anything inherently wrong with AOC, but rather because it won't be anything else in the future. During it's golden era of 2008-2010 AOC has reached it's peak and it's been in decline ever since: content and population wise. We won't ever see another expansion the scale of Khitai or even yearly adventure packs the size of Turan. Recent interview with Funcom CEO makes it perfectly clear: "We think that revenues will still decline until the launch of LEGO, that's our prediction. Now we've done all the restructuring, operating costs will be stable. Revenue in existing games will slowly decline over time, that's the long term trend. It will have bumps, but we don't expect anything major to happen. The strategy is to maximise the revenue we can get and minimise cost. That's the strategy we're using for our online portfolio and we hope to be as innovative as possible with our new projects." For me that screams: we will milk AOC for what it's worth and try not to pump money into it. Granted, that might be smart thing to do when it comes to conducting business, but I am not Funcom shareholder and I don't care about their profit margins. I care about ME (my enjoyment) and what I am seeing is that the company is not willing to give me my money's worth. I won't repeat myself that I don't have any content left to enjoy in AOC, so currently I just log on, do 1-2 minigames with random strangers (which is harder and harder since Fury population is in decline) and log off (usually pissed off). At this stage it is pretty clear I need to move on. Elder Scrolls Online give me that funky 2008 pre-launch feel which AOC had - the air was full of hope and potential and glee. My dabble with ESO might end up like my recent romance with WoW, or it might be full time-never-go-back switch which, quite honestly, I am hoping for. I am sold enough on the idea of ESOsoI have unsubbed from AOC (thankfully FC didn't trick me into getting some kind of 1 year sub deal!) and bought early access. Apart from being modern MMO (everything AOC is not) ESO has quite interesting lore behind it (sadly I never played any Elder Scroll game) and the combat mechanic is far enough from usual point & click. All of this I am pulling out of my ass because I have actually never played the damn game and my experience comes solely from obsessive youtube watching. Still if watching youtube is more engaging than playing Age of Conan for me it means that ESO is worth a shot. It's a little more than a week and I will have my answer.
Posted by Slith at 7:19 AM

Sad to see you leave again, will hang on read you post on ESO and to see if it worth buying

See you in ESO, i made preorder as well.
Please, let as know your toon name ASAP and please keep going with your blog. I looking forward to read your progress thru Tamriel.

...and belive me, reading your blog, we know what you need in MMORPG games and ESO is perfect game for you. Nice story, big PVP battles, cool quests, endless exploration. And good & strong company behind the game. No more Funcom!

I have played the beta up and down and found ESO to be incredibly boring.

But sadly you are correct about AoC. Funcom will let the game die, so it is only reasonable to try something else :)

I played it for 3 weakends (beta) and found it really boring!

I am really sorry about this francise cause I play eso since daggerfall...

Anyway I hope it's just me and I also hope you enjoy it enough for the mmoney you've spent and will spend...

Adimt, you will miss this

5 years is a long time to play a single game, it is quite rare. But I agree that the sad reality is that AoC will most likely continue on the same track it is on now. heck when the 2014 State of the Game sounds almost exactly ,like the 2013, that is a bad sign.

I did 2 beta weekends for ESO an was pleasently surprised. At the very least it feels like a big open world with a lot to explore.

Dude, I'm following you since the AoC epoch and you're really good at blogging. So, please keep blogging for ESO, or whatever else you moved into.