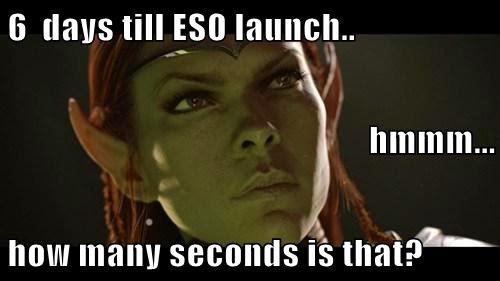 AOC and ESO for me have one thing in common: I knew about them for some time, but got interested with them few weeks before launch. Ignorance is bliss, it really is. I remember obsessing about Age of Conan few days before the game going live and I am going through same thing with Elder Scrolls Online. Don't get me wrong, I love the excitement, the camaraderie and the potential that new AAA title brings to MMO genre as a whole. I remember when AOC was in the shops (as far as I remember there was no DLC option back then, it was 2008 after all :X) and I actually had to make a call to check if AOC box was on the shelves and...it was. JOY! I ran to the shop straight from my office, tearing through crowd like a fat kid chasing down an ice cream truck. Of course when I came to the game shop i'st shelves were groaning with abundance of AOC boxes, but I was so full of glee that I couldn't have walked to the shop even if I tried, I had to run. Priceless nerd moment :X The fact that I am in my thirties now apparently doesn't stop me obsessing about whether I should pick blacksmithing or not. For me nothing has changed.
All this positive buzz about ESO makes me realize how AOC became a dried up husk that I am leaving behind. I have squeezed every bit of juice out of Age of Conan and it seems like it is just a time for me to move on. To be honest I was less than ecstatic about AOC for quite a while now, but it really took something different in MMO space to make me consider changing my game of choice. I mean I did pass up on Rift, GW2 and other after all. The pvp nerd in me is picky.

Well at least some people try to stay competitive in the field of nerdom:

Zark Cromhout Haha imagine how I feel after the beta weekend, nothing is worth doing anymore

I am prety sure you'll be back after -maximium- 6 months ;)

Well I never gave AOC the finger so I can't really say that I will be gone forever. Moreso that I have NEVER played ESO.

I will give my honest feedback about ESO on the blog, especially if PVP sucks ass.

In my 3 year of activ playing AoC, what i missing is in social parts. When AoC had good population.
I remember how we was collecting materials for guild city, how we chasing who will first bought mamuth, guild vs guild fight in Border Kingdoms and elation after first Kiliky or Vistrix dead. When i first time saw W1 and such things.

I looking this in ESO!!