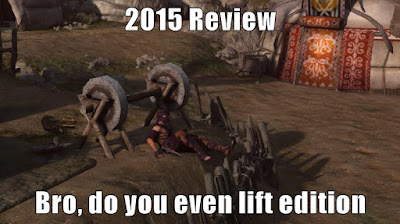 Yet another Hyborian year has passed and it is time for my savage review. When you look at the list of things that were promised in 2013/2014 it will be pretty obvious that most of the stuff did not get delivered. On another hand ..... Oh snap! Did I just copy/paste intro to last year's edition?

"Ya you did, also you have been slacking on posts as of late".

Well shut up, voice in my head, I am back to my blogging routine and OBVIOUSLY I will be back on meds soon enough.

Let me start over:

Yet another year has passed without the promised crafting revamp. Really, guys? I mean REALLY?

"Now you are just grumpily ranting"

Apart from some unmentionable community managers being angry with me for the 2014 review pretty much NOTHING changed. If anything the monthly letters (in 2015 written by Sezmra) got progressively shorter and less substantial. In the end Tomium made a thread that pretty much said "Ok guys, tell us how to do our jobs as CMs" and asked for a feedback. Apparently it was pretty unsuccess attempt because the thread got deleted and both CMs quited Funcom. AOC is now under new CM management and he already has proven himself capable of turning things around. But that, my loyal readers, is for 2016 review.

The first event was the anniversary/adventure pack called Shadows of Vanaheim which was a disaster by all means. Just read the review. On the up side Matt 'Cirith Gorgor” Bennett  in the interview I did with him pretty much said "we fucked up, this won't happen again" which was very honest and very professional of him.
The team totally redeemed itself with state of the art Halloween event The Shambling Plague. That event was so good that I will actually post a late review soon enough.

This update was nothing short of a miracle. Pretty much gave Hyboria a second life and brought the game a little closer to modern MMO standards. I now spend my time in the game going from zone to zone doing all the quests for the achievements and snatching up those treasures along with panoramas. I am doing this mainly for the story and  I have found some real GEMS when it comes to quests that I have missed leveling up back 2008. Being now well versed in the black arts (and by that I mean having good knowledge of REH's Conan) I can really appreciate the creativity that went into the creation on some of the quests. My only wish is that achievements update went on top of another, more substantial update because achieves are great side dish, but fail a little as a main course.

Biggest surprise of 2015 was The Palace of Cetris going live. No one, I mean NO ONE expected the team to actually finish the T6 raid and go live with it. Of course T6 being top tier raiding is pretty much open to few Crom guilds but that is supposed to change with new Raid Finder system.

So as you can see not much has happened during 2015 but what went live was of great quality (except Shadows of Vanaheim which is just shamefull). If you are into PVE then 2015 has a lot to offer.
Posted by Slith at 1:23 AM

Love your article and great work providing enhanced knowledge to us in such a fascinating way and if you allow I also have some amazing stuff to show you guys about monkey paint by numbers its just a phenomenal work they are doing here!

That is such a nice way to deliver the information to people like us and I would also like to share some Monkey Diamond Painting Kits sources for others who can benefit. Keep up the good work