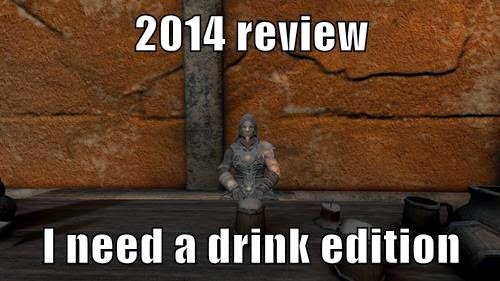 Yet another Hyborian year has passed and it is time for my savage review. When you look at the list of things that were promised in 2013/2014 it will be pretty obvious that most of the stuff did not get delivered. On another hand new gear mechanics had to be introduced to add any new meaningful content to AOC. Lets see what was going on in Hyboria during those 12 months.

COMMUNITY MANAGMENT
I often give community managers a hard time because I feel like so so very little has been done over the years to really help AOC and it's community. I spilled my beans on that subject here. With an addition of new community manager I didn't expect for things to change drastically, but I gave the benefit of doubt. Without being an asshole about it the above list is what pretty much has been done for the community over 12 months. Epic Tales ended on a less than epic note. Halloween Streaming was two community managers giggling on Twitch and dieing on their low level characters. It was painful to watch as it was pretty obvious that community managers had little to no idea how to play the game. If someone expected insights about AOC, Q&A session with a dev or learning anything about the game then it was a big let down. I don't mind that "shits and giggles" approach to streaming once in a while IF it is a break from your regular streaming that has both purpose and content to offer. If just laughing your ass off for 2 hours on Twitch is the only thing you are going to do over 12 months then why even bother. We also had one youtube video re-post and one player spotlight. What was that about? Why even bother to do something once and then abandon it completely? I am not going to talk about forum re-design. I will just mention that old design was the best thing I have seen when it comes to MMO boards and I am saddened to see it gone. However if it was needed for technical reasons then be it, it's not that super important. Community management, again as always, resorted to posting server status and path notes with addition of Tomium offering a wide array of snarky comments to the players (which is less than welcomed and opposite to helful).

EVENTS
Sixth Anniversary was a bit of a let down because of poor writing. The story was rushed, uninspiring and to make it worst it was used later on for PvP events lore. Halloween even was on the other hand very well put together and pretty much addressing ALL of my concerns about this type of content in AOC. Bonus points goes to Funcom for sticking with this new philosophy of adding something new to the events in every year.

WORLD BOSSES
World Bosses are here to stay. While WBs are glorified, gigantic pinatas but no one can deny that it is a super popular content. The improvements to the WBs, especially addressing the problems on PvP servers (where sometimes it took more than 1 hour to take down bosss) made things a lot better.
I only wish that Funcom has went a diffrent route with WBs and instead using gigantic monsters they should have used armies and generals. Cutting through the ranks of Nemedians to kill their general would be, at least for me, a lot more epic than sticking my dagger in some fat, flying demon. This content is what it is and recent changes are appreciated.

ITEMIZATION
Even thou changes to existing pvp gear were deemed "very hard" by the Game Director later on we got awesome stats re-balance which resulted in closing the gap between T1 and T3 pvp gear and making T3 pvp gear more desirable for pvp than T4 pve gear. Great change! I did't enjoy pets this year. Pets, pets, pets, everything gives you pet reward. New pvp currency in a form of victory tokes can be spent pretty much on more pets. At very least  with the planned addition of solo arena all those pets are making sense now. The single most important addition to AOC this year were new gear mechanics which were needed for AOC to expand and provide future content. Developers have coded themselves into trap post 1.5 because with no stats cap item budgets could only gone up resulting in T4 gear making pretty much everything painfully obsolete. New mechanics are great for adding new items that are not simply a flat power upgrade and also set bonuses encourage mixing and matching between set pieces. Bonus points goes to Funcom for making finess hits a PVE exclusive and thus avoiding the age old issue of PVE gear being more valid for pvp. Check out more info on new mechanics here.

I am not much of a raider so I can offer a little insight about raid related changes. T5 raids are developers buying themselves more time in order to pump out T6. Adding T5 was a smart move because it was painfully obvious that T4 raid was .... raided to death (sorry for this bad pun) and PVE players were ready to move on (to another game most likely). T5 raid uses old bosses and raid zones but has new mechanics. I would call it a blatant attempt at stopping PVE population from leaving if it wasn't for the addition of gear with new mechanics.


PVP Festival turned to be something oh-not-so-hot (check my article here). Most of the veteran pvpers ignore daily quests and pvp festival as they have nothing to gain there and what is left are mostly alt farmers that are making the events into Bori 2.0. The event and daily pvp zones lack of proper UI solutions (on screen messages and whispers are lackluster and remind me of MUD games) and it's not even clear where the even/daily quest is taking place, players must go from zone to zone and discover it for themselves (hint: most don't even bother).
But events are what they are: cheap content delivered very fast and I cannot argue with the cost-to-quality ratio because, in all honesty, it still beats Bori by far.
What I am very upset about are Minigame streak system and minigames abandoned count. Game Director promised that Minigame streak would be also made for tournament mode so to encourage group play in AOC. He didn't deliver on that promise. Furthermore minigame streak quest can be broken/failed not only by losing the game but also via abundance of bugs like server kick, or getting CCed under map. What is Funcom solution to that? New item called Indemnity which pretty much acts as insurance against losing. So what it bad about it? Its cash-shop exclusive item and that is just evil. It's Funcom saying: pay us not to get fucked over by AOC bugs. This item should be buyable with tokens and the fact that it is not is a blatant money grab executed in a worst possible manner. To add insult to injury minigame abandoned count, a new type of visible stat, doesn't really count minigames left but rather the amount of bugs. I for exemple didn't leave a single game and I can boast an amazing 13 minigames left. You can check a video of me getting 2 minigames abandoned in one game (while staying in it!) and see the bug report thread. If I had to sum up pvp content for the year 2014 I would say: most noble of the intentions, most poor execution.

FIXES AND CHANGES
I really liked how the devs quickly responded to obvious problems. In previous years it took months for anything to get fixed and now a lot of stuff got hot fixed within a week or so. An auto loot feature is amazing addition to the game.

CLASS BALANCE
Changes to the classes were very welcomed as it's been years since even most simple tweak. I especially like how Conqs got finally toned down a bit. Alternative advancement changes were a nice try, but as long as the game rewards stacting +crit everyone will use same set of AAs.
Posted by Slith at 4:02 AM

there was a more than one stream?

There was around 5 streams total that I know of .. all of them as horrible. One was TSW only.

Yes and no. The finesse hits will not work in PvP but the other set bonuses will still work. Demo for example gets a set with just as much (little bit more even) firepower as T4 but will be running around with 2 pets. Hoxes get a set with a ton of firepower and double duration on the hardest hitting dot in game. Necros get more duration and crits on pestilential blast etc.

On Fury I don't think it will be a big deal cause it will be a good long while before the first full T5 chars will be transferred but on Crom I think we will see full T5 PvE players having an edge in minis again soon.