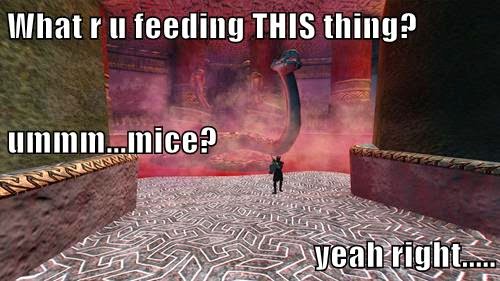 The weirdest time of the year is upon us and once more I dive in the ocean of cheese that Halloween events used to be. My oh my was I pleasantly surprised with this year's Thirst of the Serpent God: the writing on it was truly excellent. One of my many complains about the events in Age of Conan was poor, sometimes cheesy writing. Matter of fact last year's anniversary even was so poor that I didn't even write a review for it (it would have been  100% grade A complains). So what is so special about Serpent God? The story simply works and is largely inspired by REH Conan books.

What really surprised me that there wasn't a whole tons of text, the story naturally unfolded via game play and occasional cut scenes.

I have also appreciated the event for  how well it handled ALL of my previous complains posted here.

Lets do a small re-cap of old events (Night of the Lost Souls):

- zero replayability,
- same rewards for everyone,
- no challenge at all,
- very short,

The Serpent God event has two parts: the story mode in which you learn about the bloody festival itself and the survival mode in which you have to last 10 minutes on the streets of Khemi filled with bloodthirsty priests of Set (NPC) and other players (with PVP enabled).

While I enjoyed the story mode for what it was I am not really up for re-doing it. I have to note that the quest chain is pretty long, but it's nicely paced so I would say it's just about right.
The survival mode nicely fills in that "repeatable content" gap with something that I can do on a daily basis and get a reward out of it.. Granted the PVP part of the event is not all that well done but it was a BOLD and fresh idea and defiantly a step into a right direction.

As for rewards Funcom decided to give us special tokens that can be traded for chests filled with random loot. I think it is a great to distribute loot, especially that you can get a unique mount if you try hard enough (or get lucky). You can check the rewards on Henryx's Blog.

What more? The event is actually pretty hard. What pissed me off in the previous years that everything about the event was "on rails" and all the player had to do is just click the glowing item and kill the most obvious opponent. This time around not only you have to think a little (not too much) but also there is a buff/debuff mechanic that you have to manage in order to survive. I didn't have much troubles with the event, but I like that the devs made an effort to challenge the veteran players. In that regard the fact that official forums have "Halloween Quest Too Hard" thread is a good thing.

Given the story, new mechanics, rewards and cut scenes I would dear to say that we got served a quality content. The survival mode has some major flaws (like an area where once you get criminal debuff you can get farmed), but I am all for allowing the devs to experiment and learn in the process.

The fact that you can also re-do previous Halloween events along with the new one is pretty great so if you intend to do Lost Souls, By The Light of the Moon and Serpent God you are looking at pretty sizable content that will  take you a good couple of hours to tackle.

The update you shared on that event is really wonderful dear. I just love Halloween celebrations. This is the reason I have decided to plan a party at best New York Event Venues. I am really excited for this year’s Halloween party.