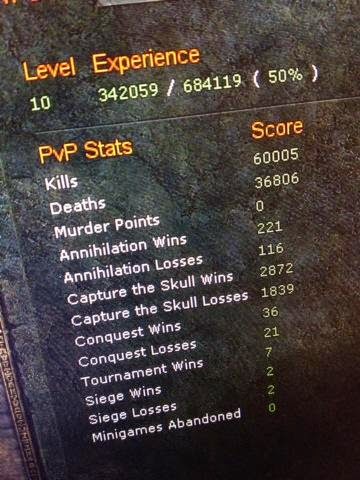 Another milestone conquered: 60.000 kills. While my ultimate goal is 65k a new challenge presented itself: PVP Arena.

Last time I got excited about new AOC content was when Mozes was a cowboy so...back in 2012? I remember that Dragon Spine got me pumped quite a bit (oh how crappy it turned out to be..).
I was pleasantly surprised to read Game Director Letter – October 2014  achievements, pve and pvp arenas? Damn right! After re-reading the letter couple more times (reading comprehension fail) I noticed that....PVP arena will be a solo content. I immediately did what any sane person would: I tore off my clothes, ran through my neighborhood butt naked and screaming and then, while rocking back and forth at my desk, I got on forums and complained about it.

Game Director was very blunt about the PVP Arena:

2Nusquam Can we expect 2x2 3x3 arena with premade?
The design I have read is for solo. Premades etc require more codework for matchmaking and greater scope. Can be considered for the future.

Solo. Wow. There are two things that Funcom made me allergic to: "solo" and "bragging rights".

Sitting down to write this post I promised myself that I wouldn't cry and I wouldn't write over and over and over again how PVP needs to be enjoyed with friends and not with random strangers.
Well since I am already sobbing I can only keep my word on not explaing the importance of social aspect of pvp. Let me direct you to my other posts about friends and PVP (and how Funcom took that away from us):

By the way do developers even know what it is like to play with strangers in highly competitive environment? Have you guys been ON THE INTERNET?

Let me simulate the experience by copy/pasting my group chat from two games that, mind you, we have won!

Can you imagine this kind of communication while playing with friends? Yes? Well then perhaps they are not your friends :X

I don't need THAT in my live and this is what AOC pug system forces me to endure.

With that put aside I can get right to the point why Solo Arena is a bad idea.

Back in the day along with Renown system we got arenas that are located in Khemi and (I think) in Keshatta too. Everyone got excited about those arenas until we learned that there is almost zero difference between dueling in arena and dueling in the open world. If anything the system was more cumbersome that just pvping out in the open.

Lets see what the new arena is all about:

In the PvP version, you approach a different NPC, where you can queue for a PvP match. When a challenger does the same, a message is broadcast to the arena, informing everybody of an upcoming match.
During the period before the match, other players will be able to wager on the outcome with a Bookkeeping NPC. Once the Arena is cleared, bets can no longer be placed and both combatants are teleported to the arena floor, and after a short countdown, the duel begins and continues until one player has been defeated.
The prize pool is always based upon the actual money that was bet, preventing system abuse but also providing incentive for duelists to encourage people to come and watch them fight!
Finally, in order to give the entire proceedings a sense of progression, you can earn faction with the Pit Masters (who have both a PvE and PvP faction) for competing in the arena. Over time, you will earn access to new pets, armors and vanity items as well as unlocking special quests from the Pit Masters.

So it seems that PVP Arena is indeed 1v1 and also random.

Here is what is wrong with the core idea of instigated 1v1 PvP experience:

AOC is far from being balanced for 1v1.
Every MMO struggles with pvp balance and AOC is no exception. While I consider the game somewhat balanced I am maxed out on gear and AA, veteran pvper. It is true that every class can kill every other class, but some archetypes are more "forgiving" than others. Necro making mistake and getting KBed by Guardian? He probably will be dead before he gets a chance to get up. Guardian feared by Necro and DOTed up? A dent in Guardians HP pool. It takes different amount of skill to by successful with different classes and gear/AA difference makes that gap even wider. Furthermore the classes are obviously doing better at different things: Demo will excel at AOEing enemies in minigames and score kills, but same tactic doesn't apply to 1v1.
Last thing that makes 1v1 tricky to balance is the abundance of ready-to-use stuff that you can launch at enemy the second the fight starts. In duels you will always have your best stuff ready and we all know how things like Last Stand can affect 1vs1.
If you add gear and AA difference it can turn out that the fight will last couple of seconds and will end up in a bloody mess.


This very much simulates what 1v1 arenas will turn out to be. Thats hardly fun for anyone.

Also there is no "depth" to 1v1. It usually results in "all in" type of combat where combatants simply try to overpower one another with everything they have at their disposal. There is no reason to hold off on any cooldown since the fight might last just couple of seconds.

So what could be better? 2v2 or 3v3 arenas. I would begin with 2v2. There is so much more complexity when it comes to four person pvp dynamics. Healing, CC coordination (very important with global CC immunites), target switching, baiting, kiting, bubbles and so on. Assassin might use dull pain and go after the Demo, but that Demo has POM partner and dull pain doesn't mitigate holy damage, but what if Assassin has  HOX back up who will interrupt POM spells? It is infinitely more interesting both to play 2v2 as well as to watch 2v2.
What about bets? Well it's super easy to predict outcome of class vs class match up, especially if you know one of the combatants is skilled. Necro vs veteran Guardian? My money is on guardian. In 2v2? Well it can get tricky and of course more interesting to place the bets.

What about balance? Fuck balance! Let us go at each other throats. Make arena vicious, brutal, unforgiving content in which everything goes and winners take it all! If someone is not ready for top tier PVP competition then he has PvP events, Bori and PUG minigames to enjoy. Don't ruin your most loyal pvpers fun just to make things "even". Arenas will never be "even" or "balanced" so don't try to make it so, capitalize on competitive aspect of arenas. It will be fun because it WILL BE HARD. There is no glory to be had if there is no struggle.

And last and not least: put back "group" in to "group pvp".Seriously I think we all had enough with solo pvp experience and taking verbal abuse from frustrated, anonymous strangers.

If you support this then voice your opinion in this thread:  http://forums.ageofconan.com/showthread.php?190568-No-to-solo-PVP-arena!-voice-your-opinions