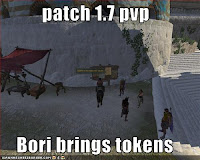 Still got that ice? Bring Scotch now for I am lvl6 and AOC yet again cheated me out of my gear (or "epeen" to be exact). Back in the day when I hit pvp lvl 3 by doing minigames (which by that time gave no xp for winning or losing) that feat was meaningless. Large chunk of server's population was just farming each other and lvl 3 gear was nothing to show off.
Lets forward that 1 year into the future. After months upon months of endless grind I had to make 14% more xp for pvp lvl 5. Then came the Bori and the 1.7 and changed the rules. All of sudden I am 15% into lvl6 and pvp 5 gear is neither uncommon nor really hard to get.  In other words: you are not a beautiful and unique snowflake.
If you had huge epeen from having pvp lvl5 gear then it has been officially cut off and feed to the dogs. PVP 5 is meaningless now. Shit, guess I gotta kill more people now.
If you rage quited the AOC because of pvp xp farming abuse and Keshatta - this is the time to come back.
With that put aside, the 1.7 brings very unique twist on pvp (atleast compared to what we were used to)
1. PvP tier 2 = tier 3 pve or better
About damn time. You get the proper pvp gear by doing pvp. Assassin's armor is looking gorgeous, almost celestial compared to pvp lvl 5 NIPPLE SET  What's not to like?
2. Tokens!
There are 4 quests for minigames, one for each map. By doining the quest (winning the minigame) you get 1 token. Quests are on cooldowns so no farmy-farmy premades. The quest have put all the maps in the rotation so no more HV horror, because there is no point in playing just one map (no rewards).
You get the other type of tokens for doing Bori content. For pvp items you need pvp xp, and both type of tokens (some minigames ones, and LOADS of Bori tokens). This I like. The system rewards consistency in pvp, prevents abuse (naked RP won't yeld any tokens and pvp xp alone is meaingless) and takes your attention away from pvp xp farm - it is all about winning now.
3. Bori vs Keshatta
I like Bori content so far. There is no point comparing it to Kesh. I need to do a lot more of Bori to have a strong opinion thou.
Posted by Slith at 11:06 PM

To bad that you have to play PvE (collecting resources) to gain pvp exp. It is just stupid. You don't have to kill anybody to gain pvp exp, and i mean a lot of that exp. It's easy to achieve 400exp per 5minutes...

Not sure how harvesting is PvE when you are only interacting with real players. Would call it more pvp rather than pve. Heck, you aren't even seeing NPCs while harvesting.

Harvesting is more PvE than PvP, that is for sure. It'll be more fun to collect scalps from enemies. I don't know how it looks on other servers, but on 2 Eagles there is no pvp. 4 guilds pick diffrents shrine and collect resources to farm pvp exp... Isn't that stupid?