it's all downhill from here 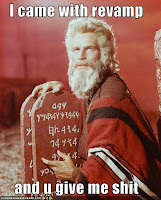 Compadres,
It is imperative that we crush the freedom fighters before the start of the rainy season.
Oh, and by that I mean, of course, it's time for you to again voice your opinions on Private, totally elitists jerks forums for assassins only, hosted on this very site.
I must admit that I kind hoped that official sin forums would eventually pick up the slack and the trolls would be long gone. Well it seems like the only thread alive is [Suggestion] Tone down the Detonation and Buff the Sins armor.
The assassins are now part of "overpowerd" crowd and any thread made on the boards will spark up an explosion of whining. I don't get it: I too think that some classes are bullshit, but I don't go on their boards and shit all over every thread. Who has the time and the ill will to continuously indulge in such activity? I am not going to point fingers, but you know who you are :D
Anywho, its pretty obvious that community that we have worked hard to maintain through 1.5 era is getting torn to pices (US boards on the other side are BOOMING with non-troll, assassin posts).
My question is (again): if I build assassin only, recomendation invite, troll free forums will you come and join the community build around it for the years to come?
drop me a line in the comments.
And remember, a shiny new donkey for whoever brings me the head of Colonel Montoya.
Posted by Slith at 12:14 PM

The idea is awesome, and I absolutely support it.

The idea is probably intended to do good. But don't abandon the official assassin forums. Funcom won't read your private forum for feedback.

I do however understand the frustration when the community is going down the drain and all you are left with is the smelly shit that is the official assassin forum.

I myself am pretty frustrated from time to time when assassins have the ability to pretty much instantly kill whoever they want aslong as the CDs are up.
But then again... They die just as fast as they did before.
But I don't go to the forums and troll about it.

But perhaps you can use your own private forum to get some great ideas and feedback going and later post that on the official forums?
Just ignore the forum-whiners, that's hopefully what Funcom will do!

Assassin's Hideout is the reason why I renewed my account a few weeks ago. I was nervous about 1.6, but, Slith, you always managed to make me beieve in our class.
Unfortunately, I must admit that today I cancelled my account one more time due to the lack of balance between the different classes. People are whining and complaining all the time. Public forums are full of big mouths who disgusted me about the game. As a conclusion, the game may be good but the community is shit. Developpers listen more to the community than to common sense... Quel dommage...

I'll be pleased to join and participate on Sins dedicated forum if you make a small room for PvE (remember ? PvE ?) :P
I even can help on phpBB or logo designing :)

The difference between US and EU boards is astounding indeed.

Definitely thumbs up for the assassin forums from me. There's no harm in trying, we'll see how it goes from there.

Yes! I'd read and participate as long as we duplicate posts to the official forums for Funcom's benefit.

Absolutely supported!
Would be awesome!

Definitely it is a great idea. Assassin's Hideout is the website that kept me interested in the game even though I've left it a few times (/ragequit), but every time there's a spark of hope here I do tend to come back to check out if it maybe is the time that the game will finally be playable by all (and enjoyable). I am pretty sure these forums will be as popular as the website is so good luck with it.

Thanks for kind comments

here is the deal:

I have bought the server, but I suck too much to set up the forums myself

It is not rocket science

I rarely post on the official forums anyway and think this is a great idea. I'd join up and I'd be in for the long-haul anyway - I've been in AoC since Early Access and Have no intention of going anywhere. There's nothing like AoC out there now nor on the horizon.

Many people here may have knowledge, but I'll offer up any assistance in setting up something like phpBB Forums. witchboon at gmail.com. I see no way to contact you directly.

Standalone forum is not good for comunity, dear slith man. I saw the movement we did through 1.05 and i saw a lot of pitifull posts corresponding our merciless gimp time. But now, when it came to GC, Soul Strike rotation.. i dont know. Closing ourselves into independent community could be a wrong step to move on. Grimsight.

Sin only, or potentially Rogue only?
Feedback could be a lot or just little/none. Sharing of builds, tactics, uses, strategies, gear-information, bullshiting, etc.
Invite only? Hell yes.

Love it. I went from N00B sin that depended on my barb friend in PvP to noob sin who could actually kill stuff 1v1 or in mini's by using this site as my guide.

It doesn't necessarily have to be private and invite only - as long as the boards are properly moderated. Take the very popular and useful arenajunkies forums for WoW as an example (although there are others too - ie. elitistjerks for PvE). It was also started because the official forums are full of trolls, whiners and window-lickers. Nowadays it's a good place to get opinions from other skilled/experienced players, but also a place where beginners can ask more seasoned players for advice in civilized manner (to an extent, anyway). It didn't take long and Blizzard acknowledged forum's existence and confirmed that they are monitoring it for possible feedback. If your little project proves to be a success (which I think it might), I believe Funcom would eventually take notice.

some words of wisdom there, no doubt.

I am resonable man, it is up for disscusion how the boards will look and you are making a lot of good points.