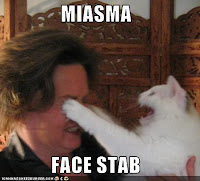 Introduced in 1.6, miasmas are probably the most misunderstood part of assassin revamp - mainly because of supposedly awesome power of GC + Soul Strike = Detonation. People feel like its the "be all" of all miasmas and it's what gives assassin "bad rap" in the aoc community.

The truth is that assassin is far from being "one trick pony" and the miasma system is in fact a deep and complex, just waiting for you to really tap into it.
This guide will take you trough more advanced areas of miasma management.

Usage: FS will apply biggest damage out of all 3 miasmas when no base poison is present on the target. Merely using FS during any combo will do instant damage around 500, with a high chance for a crit. It is always good idea to use FS during combo like Swift Strikes to add a little extra dps, even if GC or SDS are not applied.

Another obvious use if consuming one poison like SDS or GC for 2 x dmg or both SDS and GC for  3 x dmg.

Would FS ever be preferable over Soul Strike or Dart when GC or SDS are applied? Yes: when you need fast, moderate damage to finish off your opponent. Detonation gives that 4 second delay and deadly venom is a very long dot that can be out healed. FS does wonders at finishing off your target with a high chance of nice crit. The best of all: there is nothing anyone can do about it since it is instant.

Synergy: both Necrosis and Unholy Stabs feats as damage and crit upgrades are highly recommended

Vile corruption is also a great supplementation to your already formidable FS: it does extra unholy damage when you consume SDS with FS.

The last "combo" shows really how you can creatively maximize your damage output. Soul strike as miasma adds unholy debuff, so does the GC so if you have Vile Corruption feated in you can use the synergy between the debuffs and the unholy damage from vile corruption.

This is however a whole diffrent guide.


cheers from a fury sin

can you write some more about soul and dart?