Chained to Age of Conan: Unchained 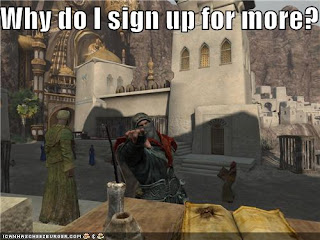 Chained to Age of Conan: Unchained? Oh the irony of it! I will be very blunt: AOC have caused me literally oceans of frustration. The devs have made (and will continue to do so in the future) bad decision after bad decision and the game in constantly in "course correct" as if, somehow, since 2008 everything has been done to "fix" broken game.

Examples? Three years in and we have non-existent crafting system (course correct: crafting revamp). Bad decisions? Bori. Upcoming bad decision? World PVE bosses. With so many woes one could (and rightfully so) ask: why do you even bother? True, I have been more negative about the game in 2009 that I am now (less negative) but regardless I would have quit the game in 2008 (easily!) if it wasn't for one small detail. What it's going to be? Combo system? Blood and guts being spilled both in PVE and PVP? Mature themes? Wrong! It is ALL about Hyboria. Since the very first Conan story I have read I knew that I have been bitten and once bitten forever smitten. Love bites! I can honestly say that I am huge Conan fan (or to be exact: REH's Conan fan) and, to my despair, where FC developers FAIL miserably, FC artists and writers show up to pick up the slack. FC's Hyboria is done right, both visually pleasing and stunning and stepped deeply in REH's Conan lore. Really, if this game had some unlicensed, low fantasy setting I would dropped my subscription faster that unwanted pregnancy on a prom night (whatever that means). What would I do if new Conan mmo came out? I find that very very unlikely, but I would go with this company that provides best representation of Hyborian era. All other "features" are, at least for me, secondary at best.

Besides all the negativity and yes, despite FC dropping the ball constantly on few issues (despite that the proper solution seems obvious to the community) I think that Age of Conan going free-to-play, going cash shop and announcing its schedule for 2012 is on a right track. I am not saying that the model and the plans will inevitably lead to superb results, but I would like to see what lies ahead, at the end of development road. Since actions speak louder than words I have bought King Conan's Royal Cache (12 month sub paid in advance).This might be me being Funcom whore, but above all I think it shows my dedication to the product as a whole. Trula, if Age of Conan all of sudden went off the market it would be a sad, sad day for me. No, really I would be upset. Very. There is so much I still want to see in this game and, despite all, it still shows so much promise. So what keeps me in Age of Conan? I think it is literally the "age of Conan",a savage era..

"between the years when the oceans drank Atlantis and the gleaming cities, and in the years of the rise of the sons of Aryas, there was an age undreamed of, when shining kingdoms lay spread across the world like blue mantles beneath the stars - Nemedia, Ophir, Brythunia, Hyperborea, Zamora with its dark-haired women and towers of spider-haunted mystery, Zingara with its chivalry, koth that bordered on the pastoral lands of Shem, Stygia with its shadow-guarded tombs, Hyrkania whose riders wore steel and silk and gold. but the proudest kingdom was Aquilonia, reigning supreme in the dreaming west. hither came Conan, the Cimmerian, black-haired, sullen-eyed, sword in hand, a thief, a slayer, with gigantic melancholies and gigantic mirth, to tread the jeweled thrones of the earth under his sandaled feet"

lMy same feelings. SWTOR is coming out soon, then GW2, but both are not so appealing to me as AoC is. I will probably try them, but I already know that SWTOR combat system will be the exact copy of WoW's one, and that means "boooring", although its lore may be very nice.
GW2 may be a good contender, but its lore is not much interesting to me. So it's quite likely that I will try them both, and then come back to AoC.
My only worry is about how long will AoC stay online. Tomorrow they will merge a couple of EU server... and I think that in less than a year they will merge Crom and Fury too.
Anyway, I have subscribed till September 2012, and I will continue to play AoC whenever I have a few minutes of spare time.