When barbarian becomes a king 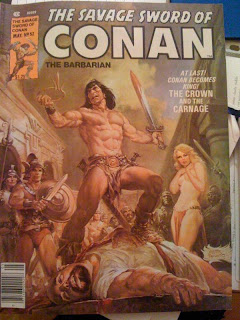 I love re-reading Conan stories by REH. I find myself noticing those little informations about Hyboria that I have missed the first time and more so references to the real, historical events that most likely inspired Mr. Howard. Mind you Howard claimed that the Conan simply "materialized" in his mind as if Howard was indeed experiencing glimpses of the prehistoric past. This is, of course, not true considering how many elements of Hyboria are lifted from our history...but then again history likes to repeat itself, doesn't it? And the Conan stories do feel like REH was merely writing down tales told to him in random order, by a seasoned adventurer (this is what author claimed). Going back to the topic: so how did Conan become the king?

When I led her armies to victory as a mercenary, Aquilonia overlooked the fact that I was a foreigner, but now she can not forgive me.

During his carrier Conan served in many armies often gaining rank of general so at his later age he was not only an able fighter, but also a competent commander:

He was a professional fighting-man. In search of
employment (he said) he had come to Keshan. For a price he would train
the armies of Keshan and lead them against Punt, their hereditary
enemy, whose recent successes in the field had aroused the fury of
Keshan's irascible king.

The proposition was not so audacious as it might seem. Conan's fame
had preceded him, even into distant Keshan;


For me it is pretty obvious that Conan has stormed the Old Tarantia with Aquilonian forces that were loyal to him. He was, after all, a very popular commander because even as a King he fought in the first lines along with his troops. It is pretty obvious that one cannot choke to death the king of the mightiest kingdom of the west if he is not backed up by thousands of swords. But there is another interesting thing that Conan mentions:

Looking back now over the wild path I followed, all those days of toil, intrigue,


People often think that Conan was this straightforward and brutally honest barbarian, incapable of cooking up any scheme or intrigue . That might have been true for the young Conan.

The Cimmerian glared about, embarrassed at the roar of mocking laughter that greeted this remark. He saw no particular humor in it, and was too new to civilization to understand its discourtesies

- Tower of the Elephant


But in fact in his  mercenary days Conan was proficient enough to understand and exploit politics, faction's struggle and was already reaching for the power:

You will like Tombalku ! It was made for men like us to loot! There are half a dozen powerful factions plotting and intriguing against each other - there are continual brawls in the taverns and streets, secret murders, mutilations and executions. (...) I am high in favor and power!


Going back to the comic that really inspired this post I find it very naive to present Conan as savior of Aquilonia, a man that "saw, came and conquered" because poor Aquilonians were oppressed by a mad man. He did it simply because he could and wanted to. His ambition was to carve out an empire of his own which he attempted for the first time, I believe in "The Vale of Lost Women" when he was war chief of Bamulas.

When King Numedides lay dead at my feet and I tore the crown from his gory head and set it on my own, I had reached the ultimate border of my dreams.

Here is where the comics books idolize Conan as this romantic hero that slew Numedies pretty much in self defence (when Conan's back was turned Numedies rushed him with a dagger). Conan killed him because that is what you do when you are taking throne by force. He mentions this in "Scarlet Citadel"


I am strongly suspecting that Conan was serving in Aquilonian army with a sole intent of one day reaching for the throne. This is something that he did before - numerous times. In "A Witch Shall Be Born" he joined Olgerd Vladislav and his Kozaki forces only to later become the chief, break Olgerd's  arm and banish him to the desert. In "The Pool of the Black one" Conan climbs aboard of the Wastrel, a ship under the command of Zaporavo with an intend to kill the Captain Zaporavo and take over the crew.

"A ship can always use another good sailor," answered the other
without resentment. Zaporavo scowled, knowing the truth of that
assertion. He hesitated, and doing so, lost his ship, his command,
his girl, and his life. But of course he could not see into the
future, and to him Conan was only another wastrel,

- The Pool of the Black One


Now about Numedides himself: he very much resembles Nero of ancient Rome.

"Now in Mitra's temple there come to burn incense to Numedides' memory, men
whom his hangmen maimed and blinded, men whose sons died in his dungeons, whose
wives and daughters were dragged into his seraglio. The fickle fools!"

He idealizes the king whom Conan killed to get the crown,
remembering only that he occasionally patronized the arts, and forgetting the
evils of his reign,


Nero's rule is often associated with tyranny and extravagance. He is known for many executions, including those of his mother and the probable murder by poison of his stepbrother, Britannicus. Nero enjoyed driving a one-horse chariot, singing to the lyre, and poetry

- Nero, From Wikipedia, the free encyclopedia


Recently I have also found some other reference to ancient Rome which might be a bit far fetched, but REH mixed and matched so many events of history and civilizations  that you can never be sure:

State persecution of Christians ceased in the 4th century, when Constantine I  issued an edict of toleration in 313. On 27 February 380,

- Christianity From Wikipedia, the free encyclopedia


"Why should you risk your lives for me?" asked the king.

"You were our friend when you sat upon your throne," answered Hadrathus. "You protected us when the priests of Mitra sought to scourge us out of the land."

- The Hour of the Dragon


So Conan protected the followers of Asura from persecution. The temples of Asura were hidden in Old Tarantia just as Christians in the Rome had their secret gathering places. Both of those religions were considered a cult at some point.

Hi I like your blog very much, all your tips are very much appreciated and the lore about REH books is fantastic. Keep up the great work.