Night of the lost souls: the souls that got lost, but sadly they are back 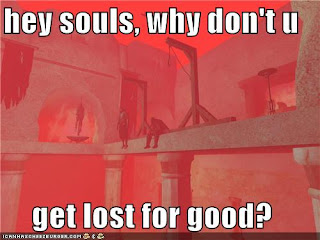 Playing through the NOLS content this year I have mostly focused of coming up with bad puns that I can throw at this content later on in the post. The content is nothing to laugh at: it is the same, freaking thing as a year before and a year before. I didn't have to pay attention to the quests because...well by know I know them enough to just: you take the necklace and shut up, you gimme the helmet and die and you spirit give me the reward and go away for another year.Why is that so? Why is it so hard to come up with anything more? It is just few NPCs and quest and few quest lines. Is it so hard to come up with something new? And the rewards....oh geez, I hate that it sounds like I am shitting over this event for the sake of shitting, but this year's rewards are craaaaaaaaap. Red hand tunic? Like that is probably one of the first items Funcom created for this game and, after being refried, we can also have it. It is decent at best. Last year's skull, NOW that is some cool reward. Just look at it:

So how it went? Well first the haunted forest. Talk to NPC, get necklaces, put it on the altar, BAM BAM the chieftain and use your port spell to jump back to Tarantia.
Talk to the spirit and then rush to the villa. You know what? I lied. Funcom does indeed give us a small twist to the NOLS chain (if you can call 2 quests a chain..) and that twist is: VILLA EFFECTS! That is right, the inhabitants of the villa spend their whole year preparing the decoration so the players can enjoy something bold, new and refreshing each time. This year's we got the red fog effect which makes things hard to see and can cause head aches. 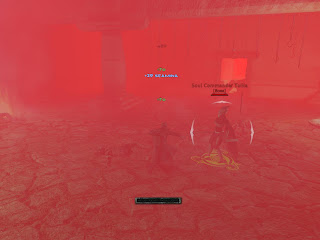 After downing the villa boss just rush back to the spirit, get your reward and be over with...unless you want to run group instance for another quest (no you don't). What is the deal with social pets anyway? I never see anyone with his pet out unless it is a combat pet. Anywho, here are the rewards for 2011: 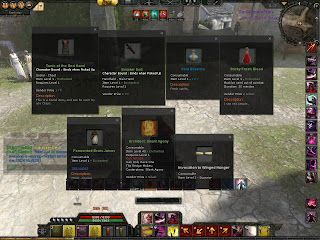 And last but not least: the ultimate proof of just how lazy the Funcom developers are. The quest text is straight from 2009 where the reward was a horned helmet . The problem is that the devs didn't bother to change the quest text. Half-ass content done in a half-ass way. 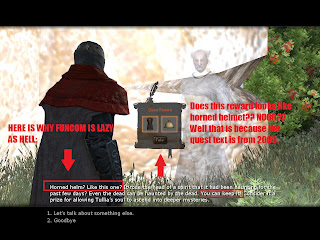 See you next year, NOLS fans! You know I am going to be there to poke fun at it (I sure hope I don't)
Posted by Slith at 9:55 AM

I really can feel big disappoitment thru your text. You wait for some new content several months and then...crap. IMO every veteran player after 3,5 years in game can't tolerate this lazy behaviour and how Funcom lead the game. In general, new content are comming too slow and when finally is here, i am not enchanted.

I am also big Hyoria fun, and was very addicted to AOC, but i am also big MMO and fantasy fun and i love to explore new worlds. I was put hand on my hart and admit myself. I can still be Hyboria fan without AOC. Then canceled subb and move my ass to Rift. Now i enjoy Rift, "crafting", "PVP with friends", cross server PVP and dungeon finder, exploring Telara, meeting new nice people, new world events every mounth, auction house, etc.

Only what is connecting me with AOC now is your blog and i love it.

Sorry, maybe this is not right place, but i must express my feeling... it is good for soul!!

This is "no jugment" zone, we can rant and QQ all we want in here :D

Every other MMO site will give you only "this is how awesome it is" type of reports and I am telling you how it is...for me.

I am very honored that despite you quitting AOC you will still drop by on the Hideout to see how things are going in Hyboria.

Don't be a stranger and may your blades never dull

for the sake of lost souls you need to post it in the official forums.

all players need to see how fucking lazy funcom is.