The workbench - crafting the crafting system 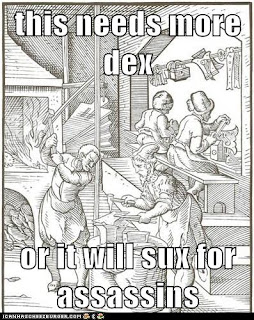 Welcome to the new segment of the assassin's hideout: The workbench. As you can see in "labels" I have created a separate "crafting" tag. I am going to definitely get into new crafting system. The old system (aka "teh turd") that we currently have is by far THE WORST crafting I have ever experienced in any MMO. Funcom have started new crafting system from scratch, but it is not like they had a big choice. Crafting was very much forgotten part of Age of Conan ever since Khitai hit the live server. The reason was very simple: basic Khitai blue armor pieces were superior to whatever crafted could have created. That and the simple fact of how rare and hard to attain the recipes are. Master crafters (aka people with most valuable recipes) were leaving the game at a rate that was higher than the recipes drop rate. Soon pretty much people with rare recipes were rare (oh how ironic).

I won't go deep into details about new system (you can get all the info here), but I would like to give you piece of my mind.

First of all: I like it. It is everything that I have hoped for and penned out in "Where is my crafting" post. I am sure that I will now invest time and resources into developing my crafting.

The random element and the time based system
I very much like the concept of "critical success" where I might end up with better item that I have hoped for. This is what makes crafting exciting. The game director also hints at possibility of adding special place in game that will speed up crafting. Speed up? Oh yeah, it is time based system, did I mention that I love it? No more spiting out 1 million artistry points for grinding gems for 1 hour. And, of course, with time based system FC can allow crafters to create some very powerful items while not allowing the marked to be saturated with them. But back to the "crating center" this place is supposed to speed up crafting. I think it is great that crafters can hang out in one place (even if artificially "forced" to). Some sort of market place for buyers and sellers would be dreamy.

Lack of recipes
I hated the idea of farming recipes. Yes, I can understand that if anyone can get recipes then no one will be able to sell item, but AOC took it to extreme. I don't want to camp mobs to trigger an even in Tarantia Commons so I might have a CHANCE to get recipe. This is why Game Director says: no recipes!! It is all about player's knowledge of the system and the resources that he has. I can understand the frustration of current top crafters, ones that have collected it all(TM). While I sympathise with them (I wouldn't like something like all of my AA's going into waste either) what AOC currenlty has to offer in terms of crafting system is sub par and people shy away from it. It has to change. The game has to change sometimes. I loved my 1.4 Age of Conan when armor stats hardly mattered. It was great. But people complained that the stats contributed now enough to the power and the progression. Then came patch 1.5 that made the stats matter. I had two choices: accept and embrace or quit. I have chosen to stay. I very much feel that this is similar change. Well, kinda. Someone will get shafted in this scenario because recipes will be gone. I am just glad that I ain't the one.

Resources
The amount of resources AOC has is absurd. Furthermore those resource drop like candy whenever you some much look at a mob. After 4 years I have 3 bank characters stuffed with resources. With the new system the resources will get "normalized" meaning that the amount will be manageable and their color will indicate their worth. Got blue resource drop? In current system it might be a common drop turd, but it new system this will indicate that there is some serious money to be made on it. Now here is a problem: I have 4 bank characters stocked fully with resources that I have been hoarding for the last 4 years. What will happen to those? They might get converted or trashed when the new system launches. I am just fine with either of the options. This is new system and some sacrifices have to be made.

Old items
Apart from T3 crafted items (like the still awesome Spine of Dagon dagger) AOC's crafting is out of sync with the current state of the game. Whatever blue items you can muster, be it armor or a weapon, a mere rank 1 faction item in Khitai beats it in every way. Not only current crafting item are missing the vital critigation stat (you NEED it for Khitai), but also other stats like protection, constitution or combat rating are not enough for the high end content. In other words: Funcom left crafting behind about 2 years ago. With the new system those items can't be ever made again, but will stay in game as "legacy" items. What is legacy? Crafter's epeen. For other people? Some old junk from the times the crafting sucked in AOC. Those items will still be in game, but rather for showing off than for being viable piece of armor/weapon.

The "knowledge" factor
The new system is supposed to be knowledge based which means that crafter will be only as good as his resources AND knowledge how to "blend" them. Just having great amount of resources (which you can buy with gold) won't cut it. I am already planning how I am going to keep track of my crafting recipes: evernote. Take a snapshot of AOC screen with my iPhone and send it straight to the proper AOC tag in my evernote. Yes, it's a shameless plug for *ekhm* EVERNOTE, but it is a free software and I am using it for EVERYTHING in my life that is related to data collection and retention. Hell, I am even using it to back up every single post of assassin's hideout and store my "I want this" list of in-game items. I am sure it will be great for storing and sorting crafting blending "recipes" as well.

To sum it up: in case you can't tell I am super excited for new crafting system. Bring it!
Posted by Slith at 1:27 AM

Email ThisBlogThis!Share to TwitterShare to FacebookShare to Pinterest
Labels: Crafting

A well thought out post. I mentioned it in one of my previous hits on Hyborian Rage. I think the potential for this to be a huge success is outstanding. BUT! I would be wary about it's initial implementation. I hope that the dev teams take the time to look for the bugs and or concept to make especially end game crafting worth all the time and effort. If they can do this, a whole new market opens wide economic wise both in new materials and in crafted items that people will be happy to purchase.

I also hope that the crafting system as the above poster suggested..set for pvper's specific as well as pve folks. That would make things interesting. I'll be following this tag set of yours as we see the new crafting system dropped. This is something I am hoping proves to be a success.