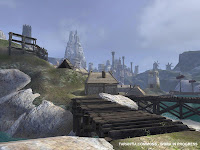 THE Silirrion, game director for Age of Conan wrote:

Tarantia Commons is currently planned to be in the same update cycle as the items and statistics update. (i.e. 1.05) It will certainly be on the public test servers during that cycle. Whether it launches in exactly the same update as the stats update will depend on testing. It may come at the same time, or it may come a little after (i.e. as a 1.05.x update just like we did with Ymir's Pass).

I am looking foward to Tarantia commons and it has really captured my imagination.
I was afraid that FC pushed it further down the line, but no - it might hit the live servers in resonable ammount of time :D
Posted by Slith at 3:27 AM

im waiting for patch 1.5 to come back to aoc.

if you can post for me some feedback at test forum about katars
they are bugged and looks very bad right now.. and patch 1.5 is the best moment to talk about it.

Here is link to the katar report:
http://forums-tl.ageofconan.com/showthread.php?t=41706

"[bug] Katars
Assassin's daggers called KATARS are being held by the character the wrong way - instead holding it by the handle, the character grips the whole thing just like a regular dagger which looks quite akward"