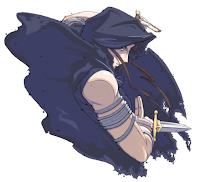 Mephs, legendary assassin of pre-gem era of Age of Conan took his time off assassinating people in real life to talk to me about his past experiences with assassin class:

Slith: Why assassin? Have you been plaing rogue-like characters in other MMOs?
Mephs:I never really played the ninja/stealth types in games prior to AOC. I usually played healers, actually. In FFXI I was a White Mage/Summoner, a priest in other MMOs, and a paladin in WoW (now a Warrior though). My assassin was essentially my real first character that was a stealthing type.
Slith: Your assassin wasn't stygian, why? It seems like majority of players rolled stygian characters
Mephs:He was stygian. :)
Slith: Your pvp movies were very nicely put together, do you have experience with movie editing? Made pvp movies in other games?
Mephs:I actually don't really do much movie editting, it was just kind of an opportunity for me to get creative and all that more than a way to show off "skills". I still don't make many movies and have made maybe 1 really lazily done pvp video in Warhammer Online, but that's all. Personally I thought the general production quality of my videos were pretty poor, but I'll blame that on the graphics card I had at the time and the fact I didn't really know what I was doing in Premiere.
Slith: Did you get into aoc raiding content or went pure pvp?
Mephs:Once I hit 80 I think all I did was randomly gank people in Keshatta for shits and giggles. I never set foot in a proper raid in that game, just kind of got really bored at 80.
Slith: Have you tried so called "hybrid build"? Your movies featured pure corruption and pure lotus builds (http://www.conanarmory.com/feat.aspx?id=1#::efe3f4e2fefef15efe2fefefefef2ef2e3fefe2af19:)
Mephs:Yes I tried it, but wasn't very happy with it. It had a lot of flexibility but the thing it lacked was a real focus. Sure you had a series of cooldowns to use to almost guarantee a kill at the time, but if any of those messed up you were essentially defenseless. It was only really good for 1v1 situations, most of the time I preferred to try and pick off someone in a group and bail, so I built my toon more around making people really go "wait, what just happened" when their buddy dies right next to them - and in that respect I didn't want to get caught in the process of escaping so it made more sense to go all-or-nothing in the spec of choice.
Slith: In one of your movies begins with a story about duel on a snowy mountain. What was that about?
Mephs:Just a spout of creativity. I wanted a neat intro so I just got a friend of mine (Fatwa) to help film it. It was fun and I think it turned out pretty cool.
Slith: Are you keeping track of what is happeining to AOC right now?
Mephs:Nope.
Slith: Have you considered coming back to aoc?
Mephs:Not really.
Slith: Do you play any mmo right now?
Mephs:I'm back to playing WoW but even that's kind of boring lately. I haven't been real into MMOs lately.
Slith: Tell us a little about Entourage, the elite stealthers guild you were part of. How was that working out?
Mephs:It was kind of a small guild, I was good friends with Wohast, the leader, and Fatwa, his apprentice forum troll. I think it was more for them than anything else that I went to Tyranny to play in Entourage. Before that I had rolled an assassin 4 times on 4 different servers.
Slith: What gaming gear you have used for AOC? Any extraordinary keyboard or mouse?
Mephs:I'm still using the same $10 keyboard I got from Walmart, and a basic 2 button mouse. I'm not a fan of these macro keyboards and whatnot, its probably not ideal for fast action PVP but it gets me by.
Slith: Are you a fan of Conan lore? Have you read any Conan book before going to AOC?
Mephs:I only knew a little about the lore prior to AOC, just "wiki" knowledge I guess, other than that no it never interested me a whole lot.
Slith: Why have you started plaing AOC ina first place?
Mephs:Was incredibly bored with WoW and wanted to try something new.
Slith: After AOC you went to WAR, how was that?
Mephs:WAR I would play again but I still feel like I'm not interested enough or have the free time to really dedicate myself to two MMOs. That and my friends on WoW keep me there for now. WAR I wouldn't really know enough people to say the same so I've kind of neglected going back to WAR.

Assassin guru:
When Mephs was posting, baby, that post was being readed like there is no tommorow.

The picture in this post features actual drawing of Mephs character.

noway.. Wohast was my favorite :)

come to Fury Slith and we can make a rogue only guild with Archonus!

I hope funcom give us an aliance system for guilds.. so we do not need Healers at all.. only rogues to make dirty jobs

Wohast was clicker :) I actualy tried to find a way to contact him so I could interview him too.