That is soooo gosu 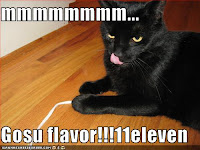 I was running with 20g in my pocket when I got stuck with "periodic temporary aoc burnout" (P.T.A.B). I have had enough with pvp xp grind, constant zerging of my ass and picts in the cellar whooping me. So I have prepared a "farewell" post and was about to quit when I got a great idea: yet another, 18g worth of a respecc - this time back into hybrid. All of sudden pvp was a breeze and PVE was E-Z mode . Is hyrbid overpowered? Hell yeah! I have made 110.000,00 pvp xp when specced with full Lotus and about 60% of that XP was from pure solo jumps in Kesh. I could kill clothies in general, but BSes and all soliders were hard as nails. With hyrbid that is hardly a problem. I know that I am switching back and forth and posting: "this is nice and that is nicer", but even when Lotus I was posting about hyrbid needing a kick.
There is not doubt that I have cut off my e-peen that grew out of being lotus (hybrid players should avert their eyes when confronted by lotus, they shouldn't speak if not asked to and also should be donating 1g a week to lotus playerbase) but hyrbid is just too gosu flavored- it kills stuff dead, and if not - it sure as hell can outlive that stuff). Oh and if you don't know what gosu means check it here.
Also in upcoming month of may I will be officialy playing assassin character without single alt for 1 year straight - I need to spin and change speccs to keep things as interesing and "fresh" as much as I can, or else I will get that "burnout" I have mentioned erlier (its not the first time as you can imagine).
Posted by Slith at 2:16 PM

Umm, I dunno if "welcome back" is correct, but good to have you back anyways :)

Looking forward to more good posts and updates from test live until next burnout (in approximatly 3 months if we follow the statistics :P)

lol.. Im Burnedout since patch 1.03.. atm I dont pvp at all because aoc is a very unbalanced game.. so try to raid BRC for equip.. raiding is a bit lame but is nice to get epic equip..

;The only reason why I would raid is to get gear for pvp so why not to pvp to get pvp gear in the first place :D