As we prepare to embrace it 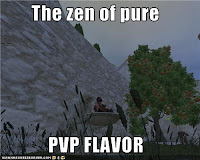 I would like to share a little story about a games I have had recently. The post will cover few things about Assassin in group pvp scenarios.
First of all the map was Blood Ravine (CTF) with probably random vs random teams. There were still 4 assassins in the game so I would say it was fairly balanced and close to what we will be seeing on live (at least for several weeks after 1.6 goes live)
I was sporting hybrid build with full pvp set. Most people in game were wearing t2 or mixed t2 and pvp gear.
Here was I have noticed:
From the Darkness
with new FTD assassins are very mobile. I was able to do "the superman" throughout the whole game. This has greatly limited the effectiveness of rangers which used to really heavily on their ability to kill us before we could "close the deal" so to speak.
Multi-cc
Instead of having "survival" feats I have found great comfort in being able to dish about multiple CC on several targets. You are in the shit when both Barb and HoX got you rooted and smacking around. Kick the barb to send him flying and 1 s later tab to select Hox and fear him up with Gaze. As you are "legging it" a little smash on the skull with Opportunistic Strike so Ranger won't molest you. It felt great to be able to survive such nasty scenario.
Accelerated
I simply love it. Not only the speed buff makes you feel like ninja, it also negates most snares. It doesn't really mater if you are snared for -30% if you are buffed for +45% at the same time. It also allowed me to cross the map in few seconds and join the fight much faster than I should be able when re spawning on res pad. It got me out of sticky situation to "live to fight another day" a couple times already.
Flag running while speed buffed? Hell yeah!
Avatar of Death + Dull Pain + Cats Paw
This was probably my best combat experience in AOC so far. I got trapped on the bridge between spell weaving Demo and HoX. Of Course I should melt instantly under that kind of damage and jumping down would probably make things worst (crippled debug, still within reach of demo). So I went  AOD>Lotus Extract>Dull Pain>Cats Paw and closed with the hox. It was like 10s of god mode with not a single hit doing jack-shit against me. Needless to say I have plowed through both hox and the demo. 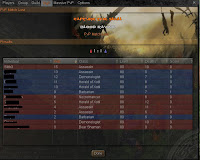 The showdown
I have ended up loosing that game on kills with 15/10 which gave me 1st place. The other 5 first places were taken all by opposing team members and the rest was my team. This is something that was unattainable in 1.5 when your performance was directly connected with how well your team was performing. It other words: you did great in great games and got slaughtered when the game was going down the shitter.
If your team had the upper hand you could get "kill-steals" with your partner "tanking" the damage and you unloading biggest guns. Right now people die fast enough to actually allow you a time frame for a quick escape. You can sprint/FTD the marauders. As you can see from the shot there were two other assassins on my team which shows that assassin performance is mainly player related and secondly - class related. It is very easy to get a lot of kills when your team is whooping the opponents (even more easy for current assassin with such an amazing dps) and what is not easy is getting those kills even as your team is vastly out-gunned on the field. That I like.
Speed is of the essence
I have learned the hard way that active debugging (lethargy upg., atrophy) should be left to pve side of things. In PVP it is all about the damage output and CCs. When trying the builds I would rather go for damage synergy(one feat affecting the other one) than for stuff that will make you survive more. This creates this unique "the best defence is an offence" mentality where assassin stays hyper aggressive, but  yet still very tactical about his choices.
The glass canon complaint
I must admit that I was amongst those who felt that our "glassiness" is taken one step too far. What I wasn't aware of that there was a need to stay alive. I was just assuming that there is no death penalty and thus you should just kamikaze yourself into every other player, hoping for the best (meaning for each of your deaths you kill at least 1).
After a while I have noticed that death comes with a hefty price: all your shards are restarted and back to 0.
So with staying alive there is in fact this obvious payback of returning to fight with full set of shards. The shard regeneration feats should be used in a way that is complementary to the natural regeneration, not as THE source of shards (die fast, re spawn, pop crystallized lotus, get back into fray, die again). It seems like shard management is executed through skillful survival rather than depending solely on cool downs. And last but not least: there is a lot more crazy shit you can pull off with 5/5 shards and both regenerators ready for use
Overall this patch takes you from "established pvper" to "noobie" - there is A LOT to learn and yet to discover. I would dare to say that the only thing 1.5 assassin has in common with 1.6 beast is that they both have short range daggers and can be easily killed - the rest has changed beyond belief.

edit: the shard mechanic was changed as I was typing this article. The shards will now stay though the death! Check it here .
Posted by Slith at 10:13 AM

From IRC:
"<@Ilaliya> It's fairly rewarding when players see a class as how you intended it. Meaning the class communicated itself rather well."

After reading your article :)
And I can't wait for it to hit live :D

Dev reading my random crap?
in that case: BIG EPEEN!

I too can't wait for the sweet sweet 1.6 love that we are about to recieve