Where is pvp 6 gear? 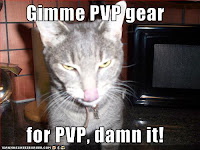 As first batch of 1.6 goodness is closer to going live (little hint, eh eh?) I am asking myself: where is new pvp gear?

You want to know in what state AOC is in right now? Log onto TL server and you will see people wearing ONLY tier2 gear. PVE crap.

So in a environment where players are given unlimited access to all the gear (and it is what TL does) overwhelming majority of population will gear up with tier 2 FOR PVP DUELS! Now how sick is that?

What is even more confusing is that next tier pvp gear is already in game:

Those screenies doesn't ring a bell? Well check this out:

That's righ! We have seen this concept art in one of the articles by FC published back in the day...2008! I might sound like a broken record over here, but I have gladly joined AOC for it's distinction: PVE gear for PVE and PVP gear for PVP (its a complex concept, but I think we can manage that). With new tier 3 coming live whatever "pure pvpers" can scrape together (meaning: full pvp set which is a BITCH to get) will be horribly outclassed by ...PVE gear. That means that in order to stay competitive (and lets face it: that is exacly what PVP is - competition) people would have to join raids to grind PVE stuff so they can enjoy PVP later.

This is totally not what I have signed up for - gimme my next tier and make it so awesome that PVErs will cry. Please?

The only explanation I can think of for not going live with lvl 6 pvp gear is the fact that grinding lvl6 in old school and fair way would take shit load + d20 ammount of time. A lot.

To sum it up: I can bet that whenever pvp gear is coming (more than 15 weeks after tier 3 goes live? probably) people will be using it for several months already before hardest of the hardcore gain their next tier pvp gear. There will be something to cry about for sure :D

Where did you get the tool "RDB Browser" from?

nice post, rly nice to know that this epic master piece is already in the game. it looks like a ninja! With so cool looking armors for sin I dont know what to wear, T2, pvp T2 or the new expansion armor?

but mate your point or view about pvp e pve gear is sad... its only because you dont like pve. Im not going to dicuss it here but wtf?

PVE gear being superior to PVP gear in PVP? Yeah, there is not much do discuss here :D

lol a PvE Carebare found here aswell. So pumpkins you think PvE gear should be superior to PvP gear in PvP aswell or?

I meen wtf. It aint that hard to PvP all the way to pvp-lvl 5. and then you realize that you could have gotten better gear by just doing brc for 4 weeks.

Dont bring up bullshit like that. Make a count of how long it takes to get the full T2 set. and then you can try getting a number of hours of PvP it takes to get PvP-5. Then plz try saying something like " PVE-gear should be superior in PVP compared to PVP-gear."

So sick of these mofo a-holes doing PvE allday and crying that PvE gear should be better than the PvP gear.

Lets all take a chill pill over here and take that crap to the forums :D

Hjulstad, First of all Im raiding since 1 year and in this year I got pvp lvl 4 and I need now only 24% to lvl 5, I raid EVERY week and I still need one pieces for full T2.


who said that I like it run pve shit?
I run brc just for the fucking gear and Its a fucking boring instance.

I dont give a shit what gear should be better I will get all possible sin gears anyway. I have a life time account, I have all the time in world to farm it.


now use your brain and think about:


If funcom makes pvp gear T1 better than "pve" gear t2 in pvp, NO ONE will run BRC raids anymore. Ppl dont run BRC because they like to kill the same bosses 9482309 times and to collect all pieces to run vilas. You run BRC to get a good gear and to be able to use it not only against lvl 80 npcs.

you can cry how much you want, funcom will never make pvp t1 better than pve t2.

PVP weapons btw become suddenly better in PVP with the revamp. PVE epic daggers don't have +crit or +crit damage on them but PVP daggers do have, and a lot.

I have a hunch that we might see new pvp t2 gears soon, or maybe not :\