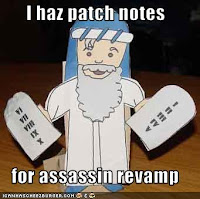 I would say that the revamp had addressed all of our issues, or at the very least - most of them.

Lets get down to the nitty, gritty details:


Assassin on the TL
It is very hard to test any pvp performance on TL because most of the testers are either other assassins, noobs at their class (people who log on on TL to decide on next alt they are going to roll) or interested only in duels. Duels are the worst testing environment you can imagine. If you are dueling then just spec in hybrid to go A FTD->Opportunistic Strike->Death's Gaze->Snap Kick->Avatar with some DPS thrown in and you can haz victory. 1.6 hybrid is even more "cc lock" oriented than the dreaded 1.4 build.

Let me be brutally honest about this - if you bring that shit into group pvp scenario like a minigame and you will get your ass handed to you.In minigames you won't have you avatar and dull pain on all the time and what is more important: even if you did you will now get focused ... a lot. Simple root means death for assassin without anti cc because we have even less melee survivability than before. Its hard to say how viable will non general tree hybrid be on live but you can imagine what will happen when you get snared and then root with barbarian on your back. You must deliver a devastating attack without getting hit yourself. The new assassin mentality is glass canon all the way: with much glass and much canon - at last.

Do we have FUNdations?
Revamped assassin, unlike 1.5 crap fest we have now,  is fun for several reasons. First of all we have our unique set of feats: toxins, base poisons, miasmas. I can only wonder how expansion will add another layer on  top of that and how it is going to expand what we already have. Another meaningful thing is that we have soooo many build options - you can sit on your ass all day and you will come up with something new every minute. Because no tree is clearly superior than other (unholy armor + avatar gave corruption an edge over lotus in 1.4 when it came to hybrid specs). In 1.6 you can build your hybrid around different concepts since both trees have "avatar" now (lotus overdose has some very neat anti ccs too) and both lotus's anti caster tools and corruption "melee closing" tools (ftd, accelerated) are early tiers that can be feated without sacrifices. Oh, did I mention that you can almost do no wrong when it comes to feats? All of them (with sad sad exception for lethargy upgrade) are viable, usable, and worthy of your points. How freaking cool is that? Remember this? We also have first stealth mechanic evar! Stealth attack now also applies face stab which doesn't take up shards and....can be upgraded with added crit and damage.

Lotus is still lotus - not much change here. Surprisingly Lotus's ani magic tool set got upgraded with new toy called "dull pain" which BASICLLY means bubble against casters for few seconds..90% mitigation? Seriously, that is bubble. You will be pleased to know that Lotus got upgraded CCs: snap kick downs rangers and BS now (fucking sweet) and opportunistic strike is what we have always needed: stun. Our crappy crappy heal is gone, but 2m cat's paw somewhat makes up for that...barely.

Since there were no revolutionary changes to Lotus tree I would call it Lotus 2.0 and give it thumbs up. I will play it.

Corruption lost it's focus
Since FC's doesn't want to make each of the trees focusing on different aspects (why the hell then Lotus is soooo anti caster?) corruption lost unholy armor and +10% evade from prediction...and 2 leeches. Corruption's survivability comes from easy, every fight stun (miasma), 2/2 atrophy (that is rather fucking nice) phenomenal avatar with life leech and above all: ability to close in fast with FTD and accelerated (which makes you move like superman on roids). What I don't like is that apparently both lotus and corruption will melt under melee damage (as any glass canon should), but only corruption will also melt under casters - if anything Lotus is now caster grinding machine. I would love to see accelerated and dull pain swapped so Lotus has access to some kind of "chasing" feat and corruption can enjoy added survivability vs casters. Doesn't look like its going to happen though :/ Personally I have never liked corruption for its unholy theme and revamped corruption did not change my mind - it is ok, just not appealing...to me.

Ah the soul shards... I have never seen this coming. I mean: shards for both trees? Not only this makes assassins even more unique, but also prevents this class from being simplistic "cc and spank" class. With cc going for 1-2 shards and last tier ultimates like avatar and overdoes consuming whooping 4 shards you will have to pay close attention to what is going on. If you run out of those unholy gems you will be caught with your pants down: you might have every single feat ready for use, but its no good without shards. People on TL complain that assassins can easily CC chain to death (can't argue with that - they can!), but in group pvp assassin could not go even through half of his cc before he would either get killed off or cced himself, not to mention that after burning his shards for chain he would be down to vanilla combos for a while.

No fireworks
Current build reuses all old graphic and animations. You won't find any eye candy in assassin revamp: there is either old stuff or none: like opportunistic strike giving....instant stun without any strike. Face stab? You can use it in the middle of other combo...without animation. Lotus dart? Nothing gets thrown. Grave blossom? Well say hello to sabotage armor icon and animation. Very disappointing .

I am sure this will be fleshed out by FC in the future. BTW things like Dull Pain should REALLY give visual indication to the casters that this buff is up... FC is aware of that and that is why avatar has so nice graphics (don't use ccs when assassin's skin is pale and hands are burning with sinister black fire...m'kay?)

What is the verdict?

- majority of issues are addressed

- a lot of possible builds

- all feats are viable and working

- corruption doesn't have any means of dealing with casters (survival)

- lethargy is crappy as always 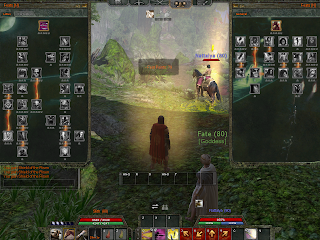 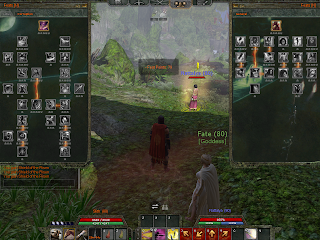 Lotus/General and Hybrid in action:

couldn't agree more:) would be great if they have improved lethargy and switched dull pain to corruption and accelerated to lotus.

Holy shit, that music in the video....god how the hell can someone listen to that crap. Good movie at least ^^

Yes Slith, I know, you don't give a flying fucking shit about raids. But some of your readers might be interested in :p

@Jaded
I know much of you raid, but I don't and I want to write about things that I know something about.

as you get older you start to give less and less hit about that you are listening to as long you enjoy the tune.

at least that applies to my case ;p

Rofl Slith, it should totally opposite regarding the music taste :D

it should but it ain't

it will happen to you,

It has already happened :| ... me driving a car and singin "Ro mah ro-mah-mah Bad romance gagaga" :D. Not happening too often luckily though because I don't own a car...

Just a note about the "no animation when using Face Stab-ability in the middle of a combo"-thing you mentioned.

This is intentional; A change was made some time ago (can't recall exactly when) to stop ability-animations from interrupting/messing up combo-animations, and it's the same (or should be) for all other abilities in the game.

(Oh, and Face Stab/Lotus dart/other abilities are getting animations and/or effects, the changes just haven't reached TestLive yet =)

I don't what the hell Slith is talking about anyway. At least I have lots of effect in all my miasmas. There IS a throwing dart when you use miasma dart. There is the bomb when you use detonation. And there are animations for all of them!

We used to call that "cooking up" combo: using for example lunge during SS would stop SS animation but the progress bar would go on and the dmg would eventually hit.

Glad to hear that more stuff is coming.

Great summary as always Slithay.
thx for the effort, I dunno about Poland, but Norwegians sure as hell DONT listen to GaGa... we get our ass handed to us by f***ing Rybak's Fairytale ten times a day -.-

to be honest I have no idea what currently is on the radio or even one song by lady gaga ;D

I listen only to political/economic talk radio.

its even at the begining of one hideout podcast :P (easter egg!!!)

Thanks Slith for your reports !!

AoC community lives because of folks like you, that takes initiatives...unlike some dudes at FC...

thanks for kind words

Slith, you just made my day with that report. i'm definitively going to resub when that revamp hits live.
great job, thank you

great review Slith, Im going to read and watch it for the 3th time.