Do we see a trend here? 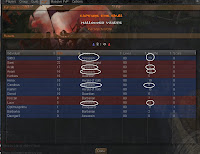 Few days ago the live servers were down for considerable amount of time so I have had an unique opportunity to run several minigames games with few different speccs. With new CC changes and assassins being "old news" already people were back on those classes that they are playing on live so minigames were not just assassin-fuck-fest. The games were mostly random vs random with decent mix of classes:

The survivability is that of an doughnut in a police station: none. You die, die, die and die some more. Everything will get you killed and there is nothing you can really do anything about. It is to the point that NOT speccing anything in general tree made zero difference. None. If you get hit with any CC the chances are you will be dead even if you break it so why bother with anti cc at all?

People will say: so you die a lot, but get to kill a lot too, that's classic glass canon

Since your soul shards are not staying through death, avoiding dieing a lot could save you quite a lot of shards. Other than that I see no harm in death in minigames. And I honestly don't know how to feel about it: is it OK to die so many times? It can get pretty frustrating when you are NOT getting the kills, but still get downed tons for times.

The DPS output is unparalleled. Stuff dies fast around you. It would be cool if not for a fact that most of that dieing comes from simple GC+soul strike = explode with a hint of SDS mixed in.Poor old Swift Strikes became absolute and it is used pretty much when both GC and SDS are on the cool down. The reason? Oh-not-so-great damage coupled with long combo animation. Perhaps adding some base toxin to SS would make it more interesting? I think the combo rotation is still fine, but I would like to see some benefit to SS in order to make it more of an alternative to GC/SDS spanking.

Best of all: you don't need to be picky about your targets anymore - you can down pretty much everything and fast. Its like a DPSer dream coming true.

With 1.6 assassin have gained another great role: we are outstanding debuffers. Just look at this list:

and best of all: its very much do-able to have most of said debuffs in regular and viable build. Nice!

The demo did not die much because you did not kill him!

what is sin's nr 1 target? other sin
I had 3 of them on my back and they would have killed me faster than i would killed the demo

is sin now class with the biggest dps in game?

Single target? We just might be the top dogs right now, or atleast in the very very top 3.