The assassin that almost was, but it is not. 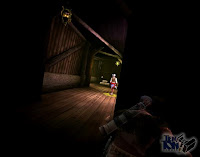 Couple days ago I have stumbled upon old class interview where the Devs were boasting about assassin. Just few things I want to show you that was "in the pipe" for assassin development, but were scraped along the way:

The Assassin is also the most proficient class when it comes to stealth, and has a bit of an easier time sneaking around than the other classes in the game.

Comment:not really true. Assassin isn't any better at sneaking than other rogues. People at forums often suggested that assassin should get extra sneaking mechanic like "forced stealth", "untrackable by rangers" etc.

Future development: We might infact see something new additions to assassin's stealth as it's iconic for this class.

While Assassins are able to use crossbows and other forms of ranged weaponry, their strength is primarily in their ability to surprise and overwhelm their target quickly. Although one could accomplish this reasonably well with ranged attacks (...)

Comment: assassins can only use crossbow which is a shame. Again, people on forums suggested to enable assassin to use throwing daggers or to let us use the bows.

Future development: Barbarians can in fact throw their weapons at their opponents (No escape)even if they wield two-hander. I think we might see assassins getting somekind of ranged feat/skill at some point.

If skilled enough in sneaking around his chosen targets, the Assassin also has the ability to perform sneak attacks to further gain an advantage. He also has a number of abilities which have additional properties if used from stealth.

Comment: It would be soooo sweet for assassins to get openers like (I hate to make that comparison..) rogue has in WoW - garrote for bleed, sap for stun etc.. What would be even sweeter if having exacly what the devs said - skills that do extra things when used from stealth like Grim Corruption from stealth would also silence the target for 2 s.

Future development: This is coming, I can feel it :D It would be the best patch for Funcom to take on the next expansion that would make assassins more unique and immersive.

His “Lethargy” combos, for instance, will dramatically lower the damage output of his chosen target, while he can further increase this effect with his “Atrophy” feats in the Lotus specialized tree.

Comment: I like that idea a lot: synergy between Lethargy and Atrophy instead of Antrophy being just superior choice. Right now Lethargy as damage dealer is nerfed through the roof and the debuff is laughable -6% to melee only.

Future development: I doubt that things will change, but I hope for synergy between those two skill/feat

In terms of other specialized feat-based group utility, Assassins can train in many abilities which are quite useful, such as:
(...)
* “Cleansing Lotus”, which can remove poison effects from their group

Comment: the poison effects are not really big part of the game. I could see this being useful if posion and posion related dots where common in AOC: posion arrows, necro's spells, posion traps etc. This fits the POM or other healer classes and I am glad it got scraped.

Additionally, depending on the stance the Assassin is in at the time, their combos will take different forms and have slightly different effects corresponding with said stance.

Comment: this half baked idea took the form of Toxic Venom/Dread venom skills which change the very mechanics of slow death strike transforming the damage into unholy/posion purely from the stance.

he Assassin is a really great class for people who like having a large strategic toolset, many abilities on the hotbar, and high damage-dealing potential.

Comment: It was a major let down for me when I found out that assassin in fact has very low ammount of "clickables" and even lower ammount of "tools" (I would say we got antrophy/lethargy, GC and Impede Life). Most icons on your toolbar will be skills of diffrent levels (like GCIII and IV) while chars like Conquerer have their bars JAM PACKED with clickable goodness.

Future development: more doesn't mean better, but I would like some "tools" that I can choose to use, instead of having them randomly proc: Burden to Bear for example should be buffed up to 20% - 25% debuff and made a clickable instead of passive. Hope we get more control over out arsenal.

Quotes and the image taken from http://www.tentonhammer.com.
Interview done by Cody "Micajah" Bye, Managing Editor at thentonhammer
Posted by Slith at 11:13 AM