Since the EU servers are down for the mergers people RUSHED to the test live to "keal the time". This turned out to be great opportunity to test things I previosly couldn't becouse it's almost impossible to get minigame on test server:

Totem Torrent
1.4 revamps poor Totem torrent that use to be "one-tactic" dominated (hide, sneak to enemy, take down totem, fragfest in the center, gg)

PVP MINIGAMES
* Totem Torrent - Various gameplay changes have been made to improve the flow and speed of this minigame. The optional resurrection points have been removed. The capture areas have been moved into the north and south buildings (to the location of the old resurrection points). If you capture one of these new areas, your totem will be much more durable. 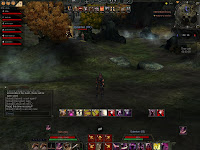 The water in the center is GONE which have greatly increased the game's performance. It has really brought down the map's "eye candiness", but the FPS got smoother. 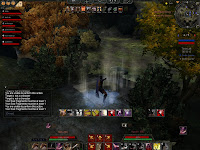 The healing spot in the center now...works! Get healers/rangers into that place and watch the smack down. 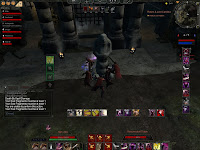 Totems got defence boost - even when 5 of us were hitting it, the HP bar was going down slow. I would even go as far as saying MAKE IT HARDER.


My observations:
1. the game is fast, but you can't do the zerg from the nearest respawn point because you have to run across the map to re-enforce you team.
2. The Tottem itself is harder with an option to make it even more durable.
3. Healing spot provides interesting tactic ideas.
4. Tweaked performance - removing water helped a lot.
5. Wide open map with something to fight over for. 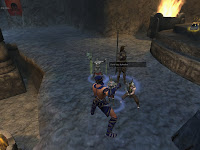 The GMs had good times making people into gigants and "little people" which of course screwed with the minigames.
Posted by Slith at 10:45 PM