You gained a new pvp level 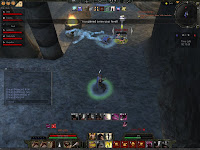 I am now pvp lvl3. I have had lolcat picture saved for month just for this occasion, but I won't post it - it's not a very happy day for me. Basicly it took me like 3 months of blood, sweat and tears in the minigames (mostly random vs premades) while I see people already in their pvp lvl5 gear that I haven't seen in minigames even once and I AM TEH MINIGAMEZ GUY! I know people who play minigames. They have either farmed the gear through endless KESH zerg (If AOC ever dies it will be bured in KESHATTA) or "guild leave and spank for xp" exploit, or better yet - combination of those. Perhaps getting to the pvp lvl4 will be more enjoyable and the lolcat will be used, but right now we are in the Age of the Casters, Cunning Deflection Warriors and gank+spank open world pvp with no real objective. I swear it: if FC did not add pvp xp and gear the AOC would be already over. The server mergers - even thou technicaly succesful - did not bring neither RP nor Minigames. I have been a big supporter of the mergers, but I just can't feel any diffrence except the fact that BARBARIAN POPULATION WENT THROUGH THE ROOF!


So I am 77pvp xp into lvl4 and I can honestly say that I haven't seen so much abuse of this game since "the Gem Wars". Hope FC and provide more pleasurable experience because this is just crap.
Posted by Slith at 1:31 PM