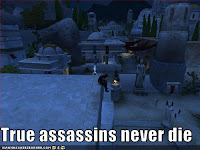 I will have to say that 1.5 IS a GOOD PATCH. Here, I have said it. There are tons of small improvments (bugs aswell, but it seems like FC is serious about quick fixes) and overall it seems like game has progressed. A lot. There are problems ofcourse and assasin community is threating with massive reroll or "quitage" (its a word that I have invented, it means posting threads over and over in which the poster threatens to quit the game - it comes from "rage" and word "quit" - quit-age). I am trying to stay away from assassin posts in general - I have spilled my guts giving tons of feedback during 1.5 test and I have nothing more to say. Even if FC won't do assassin revamp for months we still do have a lot of options when it comes to speccing. I can barely decide where to put my points.
With classic hybrid broken (no, cuting out EB won't work in PVP and PVE) people have hard time adapting. I am just glad that my respeccing costs got reseted and that I can try and try and try on TL server before applying it to live. Figuring out what works is fun. It is hard to tell whether we got nerfed badly, we got nerfed some - that is given. It reminds me old days when assassins were total underdogs. I kinda like to see assassin community to struggle and to cut their way up to being good pvpers. It weeds out the weak and the stupid (example: see how many people stuck with their TOSes after it got brought down from god-like to normal). Maybe I am this calm because I have seen this coming in TL build and knew for months how the changes will affect us. Can't blaim people who feel bad about changes - I am guilty of that too. The diffrence is I fought when the 1.5 was on TL (or whined as some might say) and now when its live I feel that there is nothing else I can do, but adapt and put up a good fight.

Right now I spend my time in Tarantia Commons doing quests, ganking people that pass through and jump into minigame when it comes up. This mix of PVE/PVP/PVP suits me. There is so much to do, gotta get my gemcutting up. Also I am SOOOOOOOO looking foward to seeing new 80lvl solo instance. Hope it is replayable. I love this kind of content.

So, to sum it up, I am not dissing anyone, people SHOULD NOT L2P nor should they STFU: the changes ARE drastic so the responce MUST be drastic too. I am sure that as time passes the 1.5 wounds will heal and we can put things in perspective. Keep it strong and stick to your guns.

Oh and necros and their pets can go to hell along with moron who designed them.
Posted by Slith at 6:46 AM