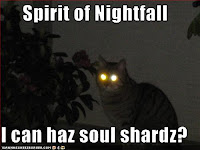 Seems like my Soul shards guide got PVE players a bit upset because I have stated that getting soul fragments in lotus stance is a bug. Apparently it is not that simple. First of all, regardless if its intended or not, getting SS in Lotus is an obvious HUGE boost to lotus build that rely on offhand - something that Corrupted Strikes excell at. Wonka (tester) replied to a thread regarding tooltips saying that "spirit of nightfall working in both stances even thou tooltip says otherwhise is *known*" . I will go out and admit that I have reported spirit of nightfall giving shards in lotus stance as *an exploit* (I deem all benefitiary bugs exploits). The funny (or not so funny when you think about it) thing is that my report was confirmed 3 days ago by ...tester named Wonka.
I might not be an assassin advocate,but I am sure as hell devil's advocate on this matter. I am fully aware that if this get changed (aka fixed) it might screw PVE players badly, but on the other side it will force FC to reinvent assassins and their tools for high end PVE content. In the end I want people to enjoy well rounded up and bug free class than pulling off crazy stunts and gimmicks from bugs just to dish out enough DPS to be deemed "helpful" but fellow raiders.
If I am wrong and its not a bug then atleast tooltip will get fixed. WIN! I am right and this get fixed then FC will have to compensate for the DPS loss (which, lets be honest, won't be huge since offhand got nerfed so badly). WIN!
Posted by Slith at 1:16 PM

I was in belief that "the bug" was occurring when Dark/Dread weapons proc and thus making unholy dmg even in Lotus stance. Since it is pretty hard to get SS's (even with non-stop dps) that way. not sure tough.. :P

"In the end I want people to enjoy well rounded up and bug free class than pulling off crazy stunts and gimmicks from bugs just to dish out enough DPS to be deemed "helpful" but fellow raiders."

And because of it, you should become a sins' advocate :P