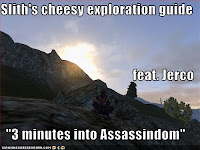 With all that negativity flying around this blog I went out and did something fun for a change.
It began with being reunited with Jerco, old cutter and brother in arms from Leopards of Pointain. For me seeing him again was going back to my roots which to be honest was RPing and not PVPing. We meet on one of Old Tarantia rooftops by a strange twist of fate and instead going into cheesy, bad RPing with made up on a spot plot that sucked I have decited to show Jerco around. In my times (pre 1.4 patch) I did a lot of Tarantia and Khemi exploration with a single purpose of getting higher and higher to places that most players haven't visited yet. Ofcourse my secrets die with me and I suppose with Jerco now (unless he rats me out) so I won't tell you how to get where we got, but atleast you can watch and wonder.

First let's clear few thing out:
#1 some of those places are well explored by other people, so don't bother to pointing that out
#2 I have figured out how to get in all the place by myself. If any guides for this exists I don't know them.
#3 No hacks were used. All 100% legit.
#4 There will be more posts like this, but I have decited to show you the best content right now. This way next posts will be less and less impressive or even interesting. Thats my policy.
#5 Difficulty scales from 1 to 5 starts. One being easy (you only need to find right way) and Five being hard as nails (lots of tricks to pull off)
#6 You are never truely an asssassin unless you got to some unaccesibile place and strike a cool pose.We got to a lot of places and managed to look half-decent while doing it. 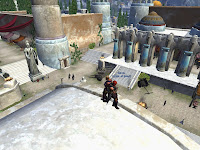 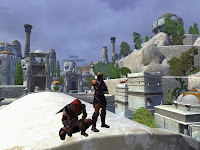 Difficulty: **
This one is no brainer. Find a right way and you are on easy street. We are standing on top of Tavern where the arena quests are and some of Villa's quests. 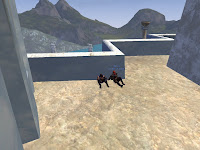 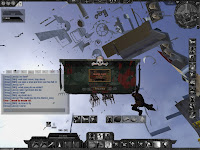 Difficulty: ***
If you stand infront of castle you will see the main gates and two smaller doors on the left and right. We got through one of these doors. Its tricky to figure out, but very easy to perform. As bonus we did a little free falling. Yes, the castle is made out of sprites... 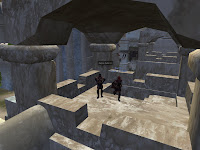 Difficulty: **
This is a tower near the Temple of Mitra. If you go down the stairs you will get stuck in geometry (the inside is a big mess of squares and such). Easy to find, and the jump is quite do-able. 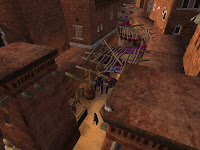 Difficulty: ****
This will never stop to amaze poor sobs below who stare in amaze on people above them. "How the hell did you get up there"?. This is one of my favorite. Damn, it is my favorite. I know that there are more than one way to get there, but was never interested to figure that out (why bash out open doors?). This will require one hard jump and one very precise. You know why /piss_drunk emote was removed? Imagine the golden shower on people below. Yeah... 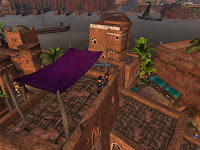 Difficulty: ****Not all that hard, but takes the most jumping. Lots of it. The view from here is very nice and you have few options on where to jump next.

Me and Jerco had a lot of fun doing this exploration. More to follow. And yes, I know few more places to keep you interested.
Posted by Slith at 11:04 AM

Nice one Slith, exploration is fun. If only we could have assassination quests that forced you to go on exploration puzzles to get a certain kill shot :)

am I a Ninja Slith?

that pretty ninja, but I have something that will knock ur sox off,

Took some time to find the way to tortages volcano. Was a pain in the butt :).

Hi, my name is Tharik, im a player of Fury server, and i've just seen all those screenshots you made through your exploration period.

Ok, and know, I wanna say that im happy to see that there are more explorers than just me and one friend which who I always like to go exploring with.

It's a shame that you are from another server, but if you ever want to know loads of secrets about exploration, i'll be really pleasured to help you ;D. Just send my a PM in the Oficial forums of AoC (my nickname in there is "Tharik".

Thx for the offer Tharik! To be honest I get off at fining places to climb and then beating them so knowing that you can get somewere is taking away half the fun :)

Its good to know there is more of us.

Well, you're right on that man ;D.

I've been trying to make for a few months a video about this places, but I've always had problems while making the video (Dont know if the problem is my PC, or Adobe Premier Pro... i should try and install Sony Vegas to see if i can finally reproduce the video without problems.. :S)