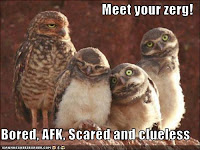 Trust me: members of the zerg will give you most xp and they are always around. The trick is to pick the right zerger as your target.Apart from the obvious like "don't attack soldiers" you are basicly allowed to go after any class, but the trick is to target player, not the class per se.

Here are your 4 best friends, recognize them and use their weakness to your advantage.

First let me tell you how the zerg should perform so you can tell who is not following the crowd:
#1 the zerg stays packed
#2 the zerg stays near the guards if not moving
#3 everyone attacks when the zerg is threaten by any player
#4 the zerg moves as one
#5 classes fill their roles like in raid: Tanks tank, healers heal and DPSes dps.

Bored - bored player is the most competent of all four. Basicly he is not very interested with what is going on his screen or he feels so safe inside the group that he let his guard down. Bored players are sometimes forced to participate in Kesh crazyness (like preraid grouping) and they show little to none interest in neither pvp xp (which is very little with zerg) nor killing others.

How to exploit this player:
Patience wins the game. Wait for the zerg to pick a target and go after him. If you attack a zerger that is active in attacking other players he will have his hands on the keyboard and mouse and ready to fight in general. Bored players usually chat up, mess around and will be greatly suprised by your unpoliteness. Don't mistake bored player for someone who is just hanging at the zergs rear end.

Common signs of bored player:
#his weapons are not out, (which means he probably didn't engage in any pvp for few minutes
#he will not be turned to the direction the zerg is going (sign of chating, both hands on keyboard)
# wearing pure PVE gear despite the fact he is lvl2 or 3 (why bother with puting on pvp gear, we own all in here)
# jumping up and down without reason (most common sign of boredom)

AFK - self explanatory. Kesh is neither time nor the place to go afk. If he wasn't afk he would be chasing your ass with the rest of the zerg so: no prisoners, no mercy.

How to exploit this player:
Kill him.

Common signs of AFK player:
# taking no action regardless of what is going on around him
#usually afk in COOL places, like on top of a rock, being all COOL
# up the guard's ass, doing nothing

Scared - these people are either new to the game or not experienced in pvp (battle hardened) even thou some of them wear lvl 5 gear (mercy....).Truth be told that we were all little nooblets once that were getting sweaty hands(TM) and uber heart rate(TM) when attacked by other player. Scared players will try to stick with the group as much as possible even thou some classes have no places in the very center of a battle (like Necro standing next to soldier). Their main concern will be not dieing and they will run away everytime when confronted. They almost never fight back or CC you, rather trying to heal themself or escape your cc.

How to exploit this player:
Attack them when the zerg is engaged in a fight. Since their default reaction is "ruan" when confronted in a group they will panic even more because they will not know how to respond (ESPECIALLY when you use avatar). If you attack them when the zerg is static he will just press S over and over again to escape while the zerg pounds you to the ground.

Common signs of Scared player:
#always with group,
#not filling their role (weird positioning in battle, casters or rangers very close to the enemy)
#if attacked he will run,

Clueless - ah the clueless people. They will do stupid shit over and over again despite the fact that it will lead them to their inventable deaths. Clueless, when separated from the zerg, are almost completly defenceless. They are the perfect targets just as they get off the spawn - follow them until their shield is down. They will often run head of zerg, run unstealthed, stay far behind the zerg, cast spells right after getting off the respawn (it gets the shield down) and do other utterly stupid things.

How to exploit this player:
They will literally stick their heads up your dagger

Common signs of Clueless player:
#low level gear with missmatched trader trash pices
#they don't use stealth
#they don't know anything about their or your class
#suprised when attacked
Posted by Slith at 8:31 AM